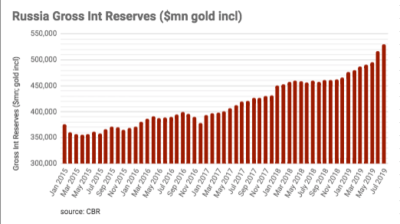 Russia’s international reserves are now well beyond the $500bn informal target that the CBR had set itself as a comfortable reserve level.

Reserves have been rising steadily all year and increased again from $495bn at the end of May, or about 13 months of import cover.

Russia now has fourth largest reserves of any country in the world after China, Japan and Switzerland.

President Vladimir Putin has set out to build a financial fortress and so insulate Russia from economic attacks by the US.

An increasing amount of Russia’s reserves are held in currencies other than the US dollar as well as in gold.

The total amount of Russia’s gold reserve exceeded 2,168 tons as of May. In 2018, Russia bought 274.3 tons of gold. Gold purchases were financed by the Bank of Russia’s almost complete sale of its US Treasury bond portfolio, the organisation’s report said.

The Central Bank mainly purchases gold from domestic producers.  Moscow, buying gold, is seeking to reduce its dependence on the US dollar in the event of an extension of sanctions by the United States.

Severe supply chain disruption continued, however, with muted rates of improvement across the sector.

Russian composite output stagnates as services PMI contracts in November
7 hours ago
Global wage growth fails to beat inflation for the first time in 20 years
7 hours ago
Fuel sales prop up Hungary’s retail sector in October
8 hours ago
Turkey's official inflation weakens for first time in year and a half, dips to 84%
15 hours ago
Kazakh manufacturing PMI signals renewed growth in November
1 day ago