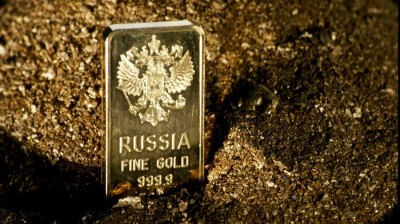 As Russia continues to try to reduce its dependence on the dollar the Central Bank of Russia (CBR) bought a record amount of gold in 2018, the World Gold Council (WGC) reported in an annual report on January 31. The record volume of net purchases of gold is the fourth year of increases in a row. Russia’s gold reserves now exceed 2,000 tonnes, worth over $80bn.

Russia's gold reserves have grown for 13 years in a row as there was a clear policy decision to shift more of Russia’s reserves to the yellow metal. Perhaps by coincidence this was the same year President Vladimir Putin gave his famous speech at the Munich Security Conference warning the west that Russia was not going to be bullied and lied to by the west any more. Russia started its military modernisation in 2012 and annexed the Crimea in 2014.

Since 2007 Russia has been rapidly accumulating gold in its reserves and the pace has accelerated recently. Moreover, it also sold a licence for Sukhoi Log, the largest gold deposit in the world last year after dithering for almost two decades. Russia is currently on course to over take Australia as the biggest gold producer in the world.

Last year’s gold purchases were financed from the sale of circa $100bn of US treasury bills by the CBR, as bne IntelliNews reported in November.

According to the US Treasury, the central bank began to actively sell American securities in April. From the beginning of 2017, investments in treasury bonds amounted to about $100bn, but fell to $48.7bn a year later.

Russia denies defaulting on $100mn bond coupon payment
Tug of war emerging over what role Iran (and its oil) should play in new world order
HESS: West wins the default battle but the economic war must go on

Russia denies defaulting on $100mn bond coupon payment
4 hours ago
A maze of smuggler tunnels: the Kyrgyzstan-Uzbekistan border
5 hours ago
Ukraine's Zelenskiy calls on the US to recognise Russia as a state sponsor of terrorism
5 hours ago
Amnesty International issues damning report on Lithuania’s migration centres
6 hours ago
At least a dozen killed in shopping mall bombing as Zelenskiy urges G7 leaders to impose more sanctions
6 hours ago