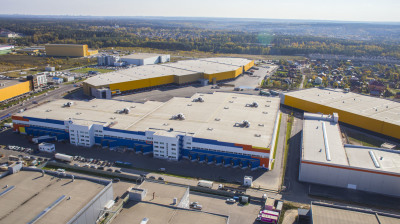 e-commerce is growing at ten-times the pace of the real economy, but the penetration of warehousing in Russia is between a half and a quarter of that in other European counties
By Ben Aris in Berlin January 11, 2020

The three partners are all serial entrepreneurs of the 1990s and noughties real estate market. Michael Lange is the founder of real estate Investment Company JLL Russia and ran the business for almost two decades during Russia’s boom years.

Collectively the three have been behind developments worth over €10bn of investment over the last two decades, including iconic buildings, offices and shopping malls in Moscow and St Petersburg.

Now the market and economy is showing the green shoots of recovery, Lange, Ott and Pascalis have teamed up to create L.O.P. Urban Logistic, a Russian Real Estate Investment Trust (REIT) with the objective of building a portfolio of warehouses focused on servicing the booming e-commerce and last mile industry with an initial € 140 million fund raising  campaigning starting in January 2020.

“We intend to rapidly become the premier partner of the Russian e-commerce industry, with a initial focus on Moscow: the largest European city,” Lange told. “While it is one of the most dynamic logistic real estate market, it is still largely under supplied and we see aligned improvements for real estate yields, lowering interest rate and raising rents at a time when the ruble has stabilised.”

Russia’s e-commerce sector is the most vibrant part of the economy. Already accounting for 4% of total retail turnover, the volume of e-commerce sales is expected to double in volume in the next few years as the sector is literally growing at ten times the pace of the real economy.

e-commerce turnover reached RUB725bn ($11bn) in the first half of 2019, up 26% from the same period a year earlier, according to research agency Data Insight, whereas the real economy grew a mere 1.3% in 2019, according to preliminary estimates.

During this period, 191mn orders were processed by Russian websites, up 44% y/y — the strongest growth rate ever recorded by Data Insight. The volume of orders in the first half of 2019 were as much as for the full year in 2016, Data Insight noted.

Average order value fell by 13%, which reflects more frequent and less sizeable orders. The stagnation of the population’s purchasing power in recent years may also have contributed to lowering the average purchase prices, noted East-West Digital News (EWDN) in its latest industry report.

While the overall sector is growing fast, growth amongst the leading e-retailers is even more pronounced as a group of market leaders emerge that will dominate the e-commerce business. Online retailers Wildberries, Ozon.ru and Apteka.ru have already established themselves as amongst the market leaders. Last year Wildberries overtook brick and mortar retailer Sportsmaster to become the biggest retailer of any kind in the fashion, clothes and apparel segment – the first time an e-retailer has become the market leader in any segment in Russia.

The sales volume of all these companies more than doubled in the first half of 2019 – after growing already by 73%, 74% and 59% respectively during the previous year, with Wildberries taking the title of biggest e-commerce site in Russia after it revenues topped $1bn in 2019.

However, logistics remains a challenge for all of Russia’s large e-retailers, which have been forced to develop their own logistics systems in order to grow their businesses. Although Pochta Rossii, the state-owned post office, has been through a radical reform and is investing heavily into its system, it is still unable to provide the quality of service e-commerce companies require.

“The logistical challenge the e-commerce companies are facing is the opportunity in the warehouse category. These companies need quality warehousing as close to urban centres as possible to effect their last mile delivery and be able to get their products to their customers quickly – on the same day as they are ordered, if possible,” says Lange.

The growth of e-commerce has already impacted the warehousing sector. While real estate development has been recovering slowly in the last two years on the back of a general economic recovery, the pace has been slow. Warehousing, however, has been the one segment of the business that has been growing quickly thanks to the ballooning demand from the e-commerce companies.

“The Russian warehouse market is entering a growth cycle with very attractive fundamentals compared other European markets,” says Lange. “There are double digit growth forecasts for the coming decade in Russia which will be driven by e-commerce companies that already account for 15-20% of Moscow’s warehouse market.”

The vacancy rate in the Moscow region warehouse market declined by 0.3 pp in the first three months of 2019, to 4.2%, according to JLL. The take-up volume in the first quarter of 2019 was 348,000 sqm, of which 60% of the deals were done on the secondary market. And warehouse completions reached 132,000sqm — almost double the level of the first quarter a year earlier, the latest data available. JJL was predicting that if all the announced projects in 2019 were completed the supply of warehouses would increase by 1.4 times compared to a year earlier.

However, Lange points out that most of the existing stock of warehouses is orientated towards traditional retail and needs to be modernised if it is cater to the needs of e-commerce companies.

“Our plan is to consolidate the Urban Logistic market, starting with Moscow, by re-habilitating existing warehouses when necessary,” Lange told bne IntelliNews.

Finally, investment sentiment towards Russia is improving as fears of new harsh sanctions imposed by the US on Russia faded over the second half of 2019. The Russian equity market returned a whopping 45% in 2019, only the third year this decade after 2010 and 2016 where it returned significant returns. Analysts are expecting the rally to continue in the first quarter of this year as political risk coefficients are being reduced that will spill over into other investment asset classes like real estate.

“The equity risk premium is continue normalizing toward the historic average of 6%. Sberbank is projecting some 250 bps of contraction in cost of equity, which translates into a P/E expansion from 6.7 to 8.0 (+20%). A 7% dividend yield increases the anticipated total return to 27%,” Cole Akeson, an analyst with Sberbank CIB, said in a note on December.