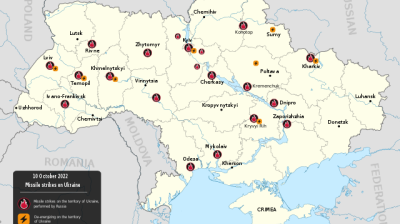 Russia relentlessly launched 100 missiles at 11 Ukrainian regions on the afternoon of November 15, just days after the war-torn country celebrated the liberation of Kherson.

The tidal wave of strikes is the largest attack on Ukraine’s power system since the start of the war, according to Ukrainian Energy Minister Herman Halushchenko. Ukrenergo, Ukraine’s state-owned grid operator, was forced to act immediately and introduced emergency blackouts across the entire country to stabilise the power system’s operation, the Kyiv Independent reported.

The missiles destroyed 15 energy facilities and explosions were recorded in nearly half of Ukraine, including the regions of Lviv, Kyiv, Rivne, Kharkiv, Zhytomyr, Chernihiv, Poltava, Cherkasy, Dnipro and Khmelnytskyi, Ukrainian Pravda reported. With 7mn citizens currently without power and night-time temperatures plummeting below freezing, Moscow’s attempts to starve Ukraine of heat have reached a critical point. Previous Russian attacks over the last month already damaged over 40% of Ukraine’s energy infrastructure, escalating the risk of excess civilian deaths once the winter sets in.

Although the strikes primarily targeted infrastructure, missiles also hit residential buildings, according to Ukraine’s Air Force spokesman Yurii Ihnat. In Kyiv, three apartment blocks were hit. Rescuers searching the site discovered the body of one dead man in the central Pechersky district, Kyiv Mayor Vitali Klitschko reported. Half of the capital is without electricity.

Ukraine’s air defence systems successfully shot down 70 missiles, according to the government. Nevertheless, Ukrainian President Volodymyr Zelenskiy told residents to stay in bomb shelters, claiming: “Up to 20 more missiles can be expected (today)”. He had warned citizens last week that Russian troops were plotting a "repetition of mass attacks" on Ukrainian infrastructure.

The strikes were so large they even caused blackouts in neighbouring Moldova. Moldovian Deputy Prime Minister Andrei Spinu noted that the Isaccea-Vulcanesti power line was automatically disconnected as a safety mechanism, causing power outages across the country, including the capital Chisinau, where trolleybuses reportedly stopped functioning.

The latest attacks took place just days after Russian troops fled Kherson, a major military setback for Moscow and a substantial victory for Ukraine. At the current G20 summit in Indonesia, world leaders congratulated Ukraine on its recent battlefield success. Nevertheless, with what looked to be a step towards peace talks between Moscow and Kyiv, the strikes have reiterated the Kremlin’s willingness to resort to brutal and criminal tactics.

“Russian missiles are killing people and ruining infrastructure across Ukraine right now. This is what Russia has to say on the issue of peace talks. Stop proposing Ukraine to accept Russian ultimatums! This terror can only be stopped with the strength of our weapons & principles,” Ukrainian Foreign Minister Dmytro Kuleba wrote on Twitter in response to the attacks.

Zelenskiy addressed the G20 via video call hours before the attack, declaring: “Now is the time to end Russia's destructive war”. However, he asserted that Ukraine won’t opt for a Minsk 3 deal, referencing the failed Minsk agreements to end the War in Donbas. During his visit to liberated Kherson on November 14, Zelenskiy emphasised that Ukraine is ready for peace, but peace for all its territories, meaning Ukraine will continue to liberate its occupied land.

"We respect international law and the sovereignty of every state, and now we are talking about the sovereignty of our state. That is why we are fighting against Russian aggression," Zelenskiy said, the Kyiv Independent reported. "We are not interested in the territory of other countries. We are only interested in the de-occupation of our country and our territories."

US President Joe Biden told the G20 that the US will continue to support Ukraine but will not conduct any negotiations without Kyiv’s involvement.

“I’ve been very clear that we’re going to continue to provide the capability for the Ukrainian people to defend themselves – and we are not going to engage in any negotiation. There’s nothing about Ukraine without Ukraine, this is a decision Ukraine has to make,” Biden said, CNN reported.

Russia’s campaign against Ukraine’s energy facilities began on October 10 and has destroyed crucial equipment such as transformers, fuses and power lines. As such, the war-torn country has been forced to stop electricity exports to the EU and is instead testing importing electricity instead. The government has told people to reduce their consumption of electricity to “reduce the load on the network”.

Ukraine and its allies have asserted that targeting infrastructure amounts to war crimes, particularly as winter approaches, causing fears that citizens will struggle throughout the colder months.

“They have two aims. Energy facilities across the whole country (…) They want panic and chaos, they want to destroy our energy system. (...) The other aim is people. They have chosen the time and targets to harm as many as possible,” Zelenskiy stated on October 10, following the first wave of attacks.