Russia is home to the world’s coldest jobs 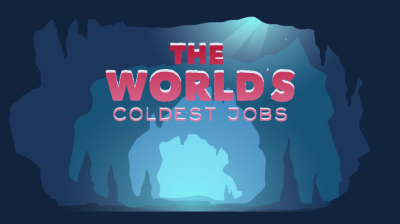 Russia is home to the coldest jobs in the world, where some employees work in average temperatures of -39C
By bne IntelliNews February 17, 2019

Russia is home to the coldest jobs in the world, where some employees are expected to go to work in temperatures further below freezing than in any other country, according to a study conducted by Crystal Ski Holidays.

Crystal Ski Holidays analysed the location, average salary, temperature and cost of rent for 12 of the world’s coldest careers.

The very coldest job in the world is that of chief technologist at one of Russia’s gold mining companies in Verkhoyansk and Yakutsk, who has to endure average temperatures of -39°C in winter, for which they are paid $57,108 per year. Yakutia is home to the lowest temperatures on the planet, sometimes falling below -60°C.

These temperatures can be hazardous to your health. Skin exposed to temperatures below -28°C for 30 minutes is in danger of suffering from frostbite, and prolonged exposure will rapidly result in death.

Canada follows Russia in terms of icy work, accounting for another 40% of the world’s coldest jobs, according to Crystal. However, the nature of the cold jobs in Canada are a little more pleasant and include a ski instructor who works in a mere -11°C, to a truck driver in Winnipeg, who has to endure -16°C. However, mining officers in Fort Selkirk, Yukon nab second place in the survey and work in bitterly cold -27°C temperatures and earn $50,000 a year.

Ironically the salaries of workers exposed to low temperatures are typically lower than those paid for simpler jobs in more benign climates. The average salary for engine installation engineers in Harbin, Heilongjiang, China (just below Vladivostok on China’s eastern seaboard) earn almost 78% less than other engineers across China, even though they work in -26°C temperatures, reports Crystal. The average salary for all the coldest jobs analysed is $40,824.58 working in an average temperature of -26.02°C. 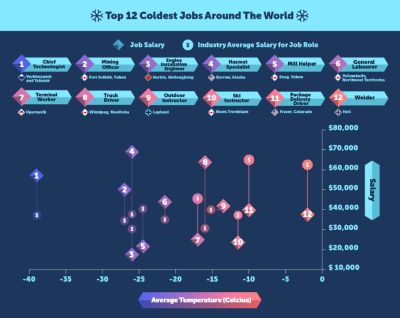 The top three jobs with salaries higher than the national average were all in North America. First place goes to fuel/hazmat specialists in Barrow, Alaska, US. Working in an average temperature of -26°C, these specialists earn $68,904 for a 40 hour week, a considerable 49.65% more than others in the country.

A truck driver in Winnipeg, Manitoba, Canada earns on average $63,700 for a 61.25 hour week and works in -16°C temperatures. They receive a salary 45.05% higher than for the same job on average in the country.

And a package delivery driver in Fraser, Colorado, US earns $39,672, while working in -10°C temperatures but receives a pay packet 29.74% higher than the national average for the same job.

The bottom three paying cold jobs with salaries lower than the national average are a mixed bag.

Worst off are engine installation engineers in Harbin who work in an average temperature of -26°C for $17,403 – well below the sector average.

A mining officer in Fort Selkirk, Yukon, Canada, working in an average temperature of -27°C, earns $50,000 for a 37.5 hour week, or -26.17% less than the average salary for that role in Canada, says Crystal. And finally an airport terminal worker in Upernavik, Greenland earns on average $24,960 in -17°C temperatures, which is 15.38% lower than the country’s average.