The Ukraine crisis has been an economic train wreck for Russia. The outlook for this year was never good, but on April 30 the International Monetary Fund (IMF) argued the Russian economy is already in recession and a growing number of analysts believe the economy will shrink this year.

That's bad news for Russian President Vladimir Putin. Last year's slowdown came as a surprise, but this was supposed to be the year of recovery. However, predictions about the economy have been steadily worsening as the months wore on: analysts began the year predicting 1.5% growth for the year, but that fell to 0.3% growth more recently. Now the IMF has slashed its growth forecast for Russia for the second time in less than a month after the economy contracted by 0.5% in the first three months of this year, saying that international sanctions and the fear of more threaten to prolong the recession. "If you understand by recession two quarters of negative economic growth, then Russia is experiencing recession now," IMF mission chief Antonio Spilimbergo told reporters on April 30.

The IMF said Russia’s economy is on track to grow by just 0.2% this year, rather than the 1.3% it forecast earlier, warning that further downgrades were likely unless the Ukrainian crisis abated.

Christopher Hartwell, head of Global Markets and Institutional Research at Skolkovo Institute for Emerging Market Studies (SIEMS), is just as pessimistic. "I think Russia is already in recession and the economy will contract this year," he says in an interview with bne.

There seems little doubt now that despite more optimistic government forecasts, the Russia’s economy will dive below zero in the second quarter of this year thanks partly to massive capital outflows and lack of investment. At the same time, capital flight surged to $20bn-25bn in March, which implies GDP growth for March may have already gone negative. 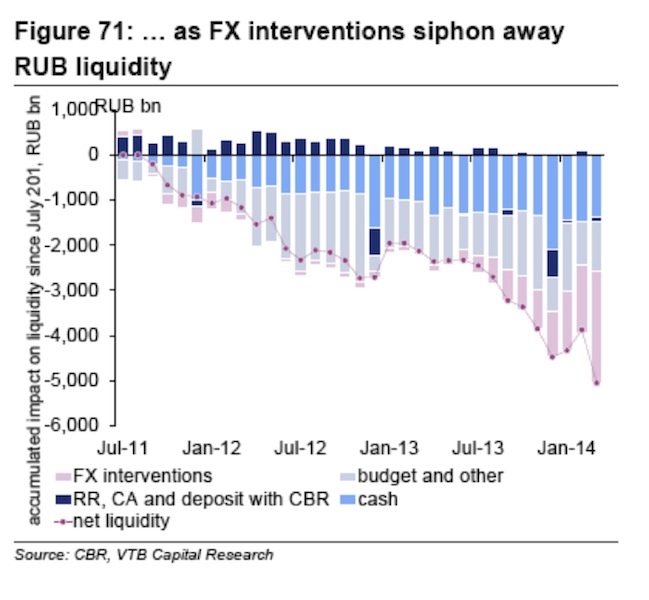 The problem for the Kremlin is there is little it can do to stop the slowdown. While other governments around the world have slashed interest rates close to zero that is not an option for Russia. "Money stimulus is suicide," said Hartwell. "Russia has got as far as it can go with the capital account or using money from the National Reserve Fund. If the central bank cuts rates, all that will happen is you'll send inflation soaring and will see the money used to buy more imports."

Capital flight is also putting pressure on Russia's banking sector, which should be one of the main sources for the badly needed investment money. The outflows have made cash scarce, so banks instead of lending are struggling to avoid a liquidity-driven crisis. "There is no investment because there is a small pool of capital and therefore the cost of the capital is high," says Hartwell. "The high interest rates represents concern, but there is also a high risk premium in Russia. The central bank can't cut interest rates, as that would just lead to inflation and growing imports."

The tanking ruble, which has lost 9% of its value since the start of the year, forced the central bank to spend billions of dollars to prop up its value. That has only reduced the pool of capital further and adds further the pressure on the banks.

Banks have turned to the Central Bank of Russia (CBR) in droves. In March Russian banks borrowed a record post-crisis amount of RUB735bn ($21bn) via repurchase agreement, or repo, transactions, as well as credits under non-market assets (bank-bills, rights of claims on credit agreements, other banks guarantee) from the CBR. Now banks owe an all-time high of RUB4.7 trillion ($134bn) to the central bank as of April 1, 2014 – amounts comparable to what banks borrowed from the CBR during the onset of the global crisis in 2008, according to Alfa Bank research.

Russia's cash pile will buy it some time, but clearly drastic action is needed to turn the situation around. With no fiscal tools to hand and the diminishing returns associated with state-funded megaprojects, the only real solution is to make deep structural reforms. "Previously, Russia was growing so fast it didn't matter how bad the government was. But now with the economic slowdown bad government makes all the difference," says Hartwell.

And here the situation doesn't look good. A fight broke out in April between Russia's finance and economy ministries. The Ministry of Economic Development wanted to increase spending in the hope of boosting growth, but the finance ministry wanted to stick to the so-called "budget rule," which limits the amount that the government can spend. So far the finance ministry has the upper hand: Putin threw his support behind sticking to the budget rule in remarks to the press in April.

The government cut federal expenditure growth to just 4% in 2013, after increasing it by 18% in 2012 thanks to unusually high revenue receipts in Russia's regions and a reduction in social payments. This year the government may tap the National Welfare Fund to meet its obligations, however the $85bn in the fund will not last forever. "Putin admitted that the problems are internal not external," says Hartwell. "Today there is strong leadership in Russia and people love that, but how beholden is Putin to the bureaucracy? The economics ministry has no coherence policy plan. Different parts of the government are working against each other. There is no comprehensive economic programme or coordination amongst the different branches of government."

The one bright light in the Russian economy is the Russian regions. Some of the more progressive are making just the reforms that the country as a whole needs to see. The most successful – like Tatarstan and Kaluga – are easily outperforming the rest of the economy as a result. "Russia's regions have become the laboratory of innovation. They are creating laws and processes needed at a federal level. But it takes time for those policy ideas to work their way up to the national level. A big part of Russia's problems is that it's still a top-down mentality," says Hartwell. "It's the janitor effect: the opinion of a PhD in the field is worth less than that of the janitor in the head office."

Hartwell says that this crisis should be put to use to make painful changes. There was a missed opportunity in 2005 and the WTO accession was another opportunity that was missed. "I am cautiously optimistic, trending towards optimistic, but it's going to be hard work," says Hartwell.