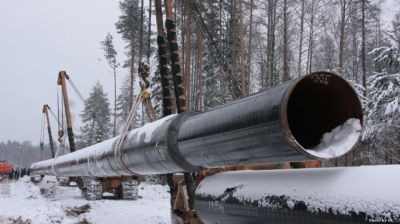 Russia is stepping up its campaign against resistance to Nord Stream 2.
By Tim Gosling in Prague July 1, 2016

Russian gas giant Gazprom claimed on June 30 that it has agreed a role for Slovakia in the controversial Nord Stream 2 pipeline project. The same day, Slovak transmission system operator Eustream announced it is making progress on linking up with the Polish gas network.

The reports appear in conflict with one another, and suggest Russia is stepping up its efforts to sabotage resistance to its bid to add 55bn cubic metres to the route - thereby doubling current capacity - under the Baltic Sea to Germany.

"Negotiations were held today with the Slovak operator Eustream. Agreements were achieved that Slovak gas transport capacity will be used within the Nord Stream-2 project framework. Parties reached understanding on the matter of joint operations and cooperation under this project," Gazprom CEO Alexei Miller said, according to Tass.

The Russian gas giant chief declined to specify details of the agreement. He only added that the pair has "agreed that such co-operation will be long term," according to Interfax. Last month, Russia announced its was keen to invite Slovakia to transit gas from Nord Stream 2 to Hungary and on to the Balkans.

Eustream has been working for a couple of years on a scheme to carry gas to the south under the name of 'Eastring'. Given the current links, the Balkans would be cut off from Russian gas supplies - and therefore freeze - should transit through Ukraine halt, as Gazprom insists it plans by 2019. The Slovak grid operator previously suggested, however, that it is not adverse to bypassing Ukraine, suggesting it could play a central role in Russia's earlier plan to build a link to Turkey.

Bratislava, which risks losing a reported €800mn per year should Russia stop sending gas exports to the EU on that route, has been a major organizer of opposition to Nord Stream 2. Eustream has noted to bne IntelliNews that it has a long-term 'ship or pay' contract with the Russian company regarding the mainline route from the Ukrainian border to Austria. Bratislava has for months railed against the planned project.

In November, Slovakia and Poland sent a letter to the European Commission signed by eight other member states objecting. However, with Germany apparently determined to push the scheme past the EU, Bratislava may feel it's time to swap sides.

At the same time, Russia is not adverse to spreading a little mischief. Moscow has long found signficant success in picking off individual EU states, either by offering juicy deals or stirring up trouble, over the years. A recent claim that Poland, the most vociferous opponent to Nord Stream 2, has asked for 11bn cm of gas from the route appears just such a ruse.

It also appears little coincidence that Miller's announcement came the day before Slovakia takes over the rotating presidency of the EU. Slovakia stressed in April that it would make the preservation of the Ukraine gas transport corridor a cornerstone issue of its six months in the role.

For its part, Eustream issued a statement that was careful to neither confirm nor deny Gazprom's claim. The company admitted it has "discussed the potential implications of Nord Stream 2 project on the gas flow through central corridor and central Europe," with the Russian company, but ws careful not to comment on the claim that it has agreed to take part.

"Eustream welcomes the assurance from Gazprom that [the] Slovak gas transmission system as well as the Czech gas transmission system will be used in long term even if Nord Stream 2 is built," the statement reads. 'Eustream also highly appreciates the understanding between both parties that the entry point from Ukraine to Slovakia shall remain fully functional even if Nord Stream 2 is commissioned."

The announcement also came the same day that Eustream reported that, alongside Polish peer Gaz-System, it aims to launch an open season procedure for a planned link between the two countries in the coming weeks. The project was initially launched in 2011, and has received significant financial support from the EU as part of its efforts to improve energy security in Central and Eastern Europe by reducing exposure to Russian gas flows.

The pipeline is planned to be up and running by 2019. With a capacity of 5.7bn cm per year, the 164km route is part of a scheme to ensure the region is linked from the Baltic to the Adriatic, including plugging states into LNG facilities at each end. It is also intended to eventually connect northern Europe to gas flows out of Azerbaijan, which has long been seen as an alternative source to Russia.

"The integration of the systems of Poland and Slovakia, as one of the elements of the North-South Gas Corridor, is intended to ensure diversification and stability of gas supplies to both countries is achieved, as well as the development of a competitive gas market in the entire region," Eustream said in a statement. "The connection of the Polish and Slovak transmission systems may enable Polish entities to access supplies from the so-called Southern Corridor, which is intended to supply gas from the Caspian Sea region."

"The aim of the open season, which is expected to start in late July and August, is the allocation and sale of future transport capacity upcoming pipeline," a Eustream spokesman told vEnergetike.sk.

The Slovak government holds 51% in Eustream. Czech-based energy group EPH – owned by individuals from closely-held Slovak financial group J&T – holds 49% and operational control. The group is understood to have bundled its 49% stake in the TSO into a holding that it is in the process of selling a stake in to Macquerie.