Russia accuses US of attempt at shifting Armenia’s Moscow loyalties 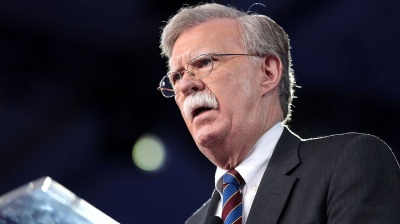 John Bolton's been making waves in the South Caucasus.
By bne IntelliNews October 30, 2018

Russia has accused the US of making a barely disguised attempt at persuading Armenia to shift its allegiances away from its traditional ally Moscow.

In a statement, the Russian foreign ministry said on October 29 that White House National Security Advisor John Bolton's comments during his visit to Yerevan last week amounted to him "demanding openly that Armenia renounce historical patterns in its international relations and [he] hardly bothered to conceal the fact that this implied Armenia’s traditional friendship with Russia".

"Naturally, he did not forget to advertise US weapons that Armenia should buy instead of Russian weapons," the statement went on.

Ex-Soviet state Armenia is a long-time ally of Russia, but relations between Yerevan and Moscow have been placed in question since Acting Prime Minister Nikol Pashinian led a “people’s revolution” in the spring that toppled a government of the small, impoverished nation that was regarded as close to Moscow.

Russia has military bases in Armenia which are crucial to its diminutive ally given its stand-off with far larger neighbour Azerbaijan over the breakaway Nagorno-Karabakh territory.

Bolton is an uber-hawk who, following visits to Russia and Azerbaijan, visited Armenia and took on the tricky issue of what the US attempt at strangling the Iranian economy could mean to Yerevan, especially should the Armenians strictly follow the sanctions directed at Tehran by Washington.

“Unsplendid isolation”
Armenia—enduring an “unsplendid isolation”—has greatly constrained trade options. It does not have diplomatic relations with neighbours Azerbaijan and Turkey and, with Moscow as its watchful strategic ally, it has to be careful in its relationship with neighbouring Georgia, which still has tense relations with Russia since the two nations’ brief 2008 war.

Bolton pledged that Washington would continue to support a peaceful resolution to the conflict between Baku and Yerevan over the Nagorno-Karabakh region.

He also informed Armenia that the Trump administration wanted to explore possible weapons sales to Yerevan that would not violate US Congress restrictions on such sales to Azerbaijan and Armenia put in place given the status of the Nagorno-Karabakh conflict, largely frozen. In his eyes, US military hardware was better than what Russia had to offer, he added.

Writing on his Facebook page on October 25, Pashinian said that his talks with Bolton were held in “an extremely positive atmosphere”.

"I think there is a real opportunity to bring Armenia-U.S. relations to a new level. And we are ready to take advantage of this opportunity," Pashinian wrote.

Armenia will have to continue treading carefully when it comes to strengthening relations with the US, the EU and Nato. Former activist and opposition MP Pashinian—favourite to win a snap general election likely to be scheduled for coming weeks—is waging a battle against cronyism, corruption, business monopolies and politicians of the dislodged establishment whom he claims are guilty of historical human rights abuses. It is not yet clear whether Russia is content enough with the direction he is leading the country in.