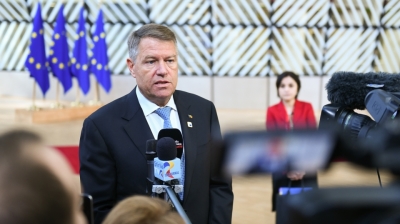 Romania’s President Klaus Iohannis said on February 23 that he stands by the head of the National Anticorruption Directorate (DNA) Laura Codruta Kovesi.

The planned restructuring of the DNA is most likely intended to weaken the anti-corruption fight in Romania, given the radical rhetoric of ruling coalition leaders Liviu Dragnea and Calin Popescu Tariceanu against the DNA’s management and what they say are the excessive powers of prosecutors. It coincides with attempts to amend laws governing the judiciary, which critics say will weaken judicial independence in Romania.

“I said it last night and I repeat. I support Ms Kovesi and I support the DNA. I have repeatedly said that the DNA is doing a good job and the DNA management is doing its job well. What I heard last night [from Justice Minister Tudorel Toader] has not changed my view,” Iohannis said in Brussels on February 23, taking an even stronger note than in his comments the previous evening.

It is the presidency's prerogative to dismiss the DNA head or not, Iohannis stressed, responding to various interpretations of the law 303/2004 circulated by the media.

Toader initiated procedures to dismiss Kovesi on February 22, based on a report prepared by his ministry. This followed months of speculation that the ruling coalition would seek to dismiss the DNA head. The report has been severely criticised for being largely grounded on media scandals as opposed to independent investigations and evaluations by the ministry.

Toader’s move ignited street protests in support of Kovesi; thousands of people took to the streets in several Romanian cities on February 25. This gives Iohannis little option but to reject the government’s request for the DNA head to be dismissed, irrespective of the government's arguments.

Adding to the pressure, the opposition Save Romania Union (USR) has drafted a motion against Toader and expressed hopes that the larger opposition party represented in the parliament, the National Liberal Party, will join its efforts.

On the other hand it would be difficult for the ruling coalition to turn back at this stage, and it is likely to attempt to suspend Iohannis from his post. Its main instrument will remain the alleged misdeeds at the DNA’s Ploiesti office; allegations that evidence was fabricated in a high-profile case have been insufficiently explained by Kovesi so far.

MEP Norica Nicolai (a member of Romania’s senior ruling Social Democratic Party) claimed that the president ought to observe government’s decision and that a refusal to dismiss Kovesi would generate an institutional conflict.

General contractor and developer Masterbuild announced that it has started work on the new Research Center in Green Aerospatial Technologies in Craiova, southern Romania. The new TGA Center in ... more