Romania’s industry returns to pre-crisis maximum, but some sectors may never recover 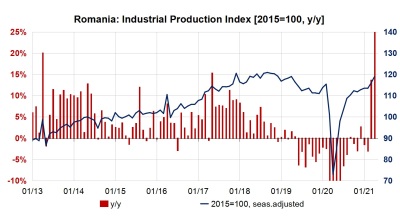 Romania’s industrial production index soared by 68% on an annual basis in April, an expected correction after one-third of the industrial sector stopped operating in April 2020 during the initial lockdown.

The correction brought the overall industrial output this April 3.1% above that of April 2019, the equivalent of a tiny 1.5% annual advance. But Romania’s industry entered the coronavirus crisis in decreasing mode: the sector shrank by 4.4% y/y in the last quarter of 2019 after negative growth rates during the whole second half of the year. The 24-month recovery seen this April is therefore significant.

Looking to the core manufacturing industries, the two-year advance was slightly softer (+2.4%) yet positive and significant.

On an annual basis, the manufacturing sector’s output was 86% stronger in April.

For some industries, the shock was tougher than for others, and the recovery rate was very diverse among industries.

In general, light industry suffered losses, after the rising labour cost squeezed profit margins, driving investors to countries at an earlier stage of development. As of April, the output in such industries was at least one-fifth smaller than a couple of years earlier.

Industries such as construction materials and plastic processing gained more than 10% over the past two years while the highest rising ones (electric and electronic parts, transport means than other cars — meaning buses for instance) added more than 20% to their output two years earlier.

Poland’s inflation unrestrained in September at 17.2%, flash estimate shows
6 hours ago
Russia’s industrial output decline slows to only 0.1% in August
3 days ago
Poll shows Putin's popularity took hit in September but remained as high as 77%
3 days ago
Russia on track to have a record-smashing grain harvest
5 days ago
Bosnia posts annual CPI inflation of 16.8% y/y in August
5 days ago