More than four out of five employers in Romania are facing difficulties in finding employees with the skills they need, a new survey from international recruiter ManpowerGroup showed.

This puts Romania among the greatest sufferers from the global talent shortage identified by Manpower, which it says has reached a 12-year high in 2018.

In Romania, 81% of those surveyed said they were facing difficulties filling positions, putting the country second only to Japan (89%).

This, said Manpower, “reflects the upward trajectory of nearshoring and offshoring over recent years. The result is that employers are left with unfulfilled roles, threatening growth and operational efficiency.”

Thanks to its low labour costs compared to fellow EU member states, relatively large population, linguistic and technical skills and proximity to major West European markets, Romania has become an increasingly popular nearshoring destination. Cities like Bucharest, Cluj-Napoca and Iasi have emerged as hubs for the IT, shared services and business process outsourcing sectors.

Increasingly investors are moving up the value chain, from activities like call centre operation to higher value activities such as software development, and even video game development.

While this has helped boost the economy, it has put intense pressure on the labour market, especially given the mass exodus of working age Romanians to seek better opportunities in other EU member states, in particular Italy and Spain. 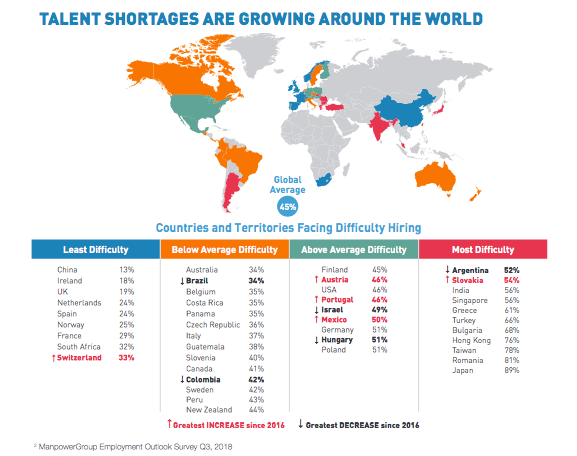 It’s a similar picture in neighbouring Bulgaria, which is also among the 11 countries where the greatest difficulties in finding employees were reported, the survey of a total of 39,195 employers across six industry sectors in 43 countries and territories showed.

In Bulgaria, 68% of employers questioned by Infocorp on behalf of ManpowerGroup said they had difficulty finding staff. In nearby Turkey (66%), Greece (61%) and Slovakia (54%), similar problems were reported.

Indeed the skills shortage is a growing phenomenon across the CEE region, where employment is rising to record highs, putting upward pressure on wages and causing employers to be increasingly creative in filling positions.

Employers from Poland and Hungary (both 51%) were rated has having “above average” difficulty in filling positions, though only 36% of respondents from the Czech Republic said they had problems, and 40% of those from Slovenia.

No countries from the region were among the nine countries whose employers had the least difficulty in filling positions. Chinese managers had the easiest task, with just 13% saying it was hard to fill positions, followed by Ireland (18%), the UK (19%) and the Netherlands (24%).

Globally, 45% of employers said they couldn’t find the skills they need, the report says, and the problem is worse for large organisations with 250+ employees, as 67% reported talent shortages in 2018.

“Every industry is impacted. From manufacturing to mining, transport to trade, employers cannot find the people they need with the right blend of technical skills and human strengths,” ManpowerGroup said.

Economies in the Central and Southeast Europe region are growing fast, but this isn’t just down to economic expansion, or even mass emigration. Manpower’s report talks of a “skills revolution”, with the type of roles and as a consequence the type of skills required changing radically in recent years. Often this includes soft skills: “Globally, more than half (56%) of employers say communication skills, written and verbal, are their most valued human strengths followed by collaboration and problem-solving,” says the report. “Keeping pace in this Skills Revolution demands faster, more targeted upskilling and talent management than ever before.”

“With record talent shortages around the world, employers should shift their focus from just in time hiring strategies to becoming builders of talent for today and tomorrow. Developing the right blend of people, skills, processes and technology is the only way to execute your business strategy, create value and improve people’s lives,” commented Jonas Prising, chairman and CEO of ManpowerGroup

Tackling this shortage has required companies to combine “upskilling” their existing workforces with reaching out to new talent pools. “Thirty-three percent are looking at different demographics, age ranges or geographies, using social and traditional media to meet potential employees where they are, or tapping boomerang retirees or returning parents and part-timers,” says the report.

In the CEE region this has included reaching across national borders to countries with lower wages and higher unemployment, in particular Ukraine. Ukraine currently has the lowest wages in Europe, according to government figures, and millions of Ukrainians have taken advantage of the visa-free regime introduced by the EU last June to go abroad to find work. As a result of the surge in migration, remittances to Ukraine from citizens working abroad are expected to top $10bn this year, the National Bank of Ukraine (NBU) said on June 21.

US warns Belarus to keep its commitment to neutrality
8 hours ago
US Secretary of State Blinken in Kyiv, warns Russia could attack “at very short notice”
9 hours ago
Defence agreement between Slovakia and the US divides politics and society
21 hours ago
Uzbekistan launches production of military drones
1 day ago
New impetus between Bulgaria and North Macedonia at top-level Skopje meeting
1 day ago