Rencap marks Russia up to Buy 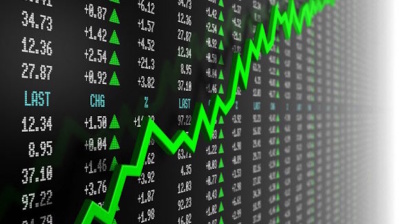 In 1999 Al Breach, the 20-something year old head of research at Goldman Sachs in Moscow, made a legendary call. He persuaded his bosses to mark the entire Russian equity market up to “Buy.”

Many thought him crazy. Russia’s financial system had just collapsed. The government had defaulted on $40bn of GKOs, the state’s main treasury bill that was largely held by foreign investors (and since replaced with the OFZs). Unemployment, inflation and poverty were soaring, while GDP growth had just gone through a 14-point swing from around 7% growth to a 7.5% contraction. And the government had no more than around $5bn in foreign exchange reserves.

But Breach was right. Any investor brave enough to have followed his advice would have made a mint. Renaissance Capital, the doyen of Russia’s equity markets in the 1990s, has just made the same call, marking the majority of Russian equities up to Buy.

The pattern was less obvious in 1999, but since then it has become pretty clear that the Russian equity market goes through regular supercycles of booms and busts.

And so on. You get the picture. The RTS continued to climb fairly steadily in the following years until it finally reached its all time peak of 2,487.92 on May 19, 2008, when the market crashed again and by the end of October that year was down to 551.96.

Clearly with these wild swings the game is all about getting your timing right, and investing just after a particularly nasty crisis actually makes a lot of sense.

“Over a quarter of a century of data since the inception of MSCI Russia (at end-1994) shows us that provided oil prices have fallen by 65%+ from their peak, Russian equities have always shown a positive dollar return over the subsequent six months (and have also outperformed MSCI EM over the same six months). We are thus overweight Russian equities on a six-month view,” the Rencap team conclude.

Russia is a cyclical market, not a steady recovery and growth market. Over the long term all the gains investors make in the good years – in non-crisis years the Russian equity market usually returns about 20% or more – tend to get destroyed in crisis years. And the crisis years can be are very bad indeed. Following the August 1998 meltdown the leading dollar-denominated Russia Trading System (RTS) index lost 85%. In March this year the RTS was down just under 50% YTD. But just as an investor can lose their shirt investing in Russian stocks ahead of a crisis, they can equally make very good returns by investing just after one.

Each of these collapses saw Russian equities lose half their value in dollar terms from peak to trough.

“Each of the four oil price collapses over 1997-2016 has represented a great buying opportunity for Russian equities, which rose by 50-239% over the following six months from the equity market bottom (34-114% from the oil price bottom),” says Rencap.

In the rebound from 2014-2016, the sector winners were financials, telecoms, energy and materials; the relative losers were consumer staples and utilities. 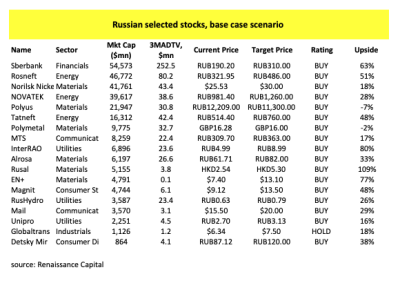 This portfolio is largely a list of investor’s darlings from the last few years and as the major stocks on the market are likely to attract the first round of investment as many have simply become “too cheap to ignore.”

Sberbank has become Russia’s “tourist stock”, the name investors buy before they buy anything else, as in addition to being a very large bank that enjoys many competitive advantages thanks to its state-owned status, it is also a play on both the consumer story and the overall economic recovery.

Rosneft and Norilsk Nickel are the largest oil and metal companies respectively, whereas Novatek is Russia’s biggest independent producer of gas and LNG. Novatek’s share were on a run last year and doubled in value together with those of Lukoil, Russia’s largest privately owned oil company.

Most sectors are represented by the list. Polyus Gold and Polymetal are gold miners, Alrosa is the diamond monopolist, although it just had a terrible year with poor sales in 2019.

The utilities are represented by InerRAO, RusHydro and Unipro; online and telecoms by Mobile TeleSystems (MTS) and Mail.ru Group; retail by Detsky Mir and Magnit; and transport by Globaltrans.