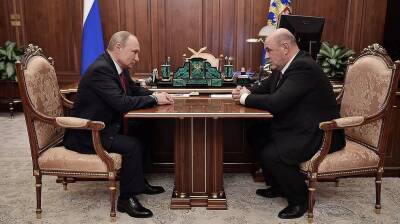 President Putin has established the Co-ordination Council, which will be headed by Prime Minister Mikhail Mishustin. / bne IntelliNews
By bne IntelliNews October 24, 2022

While Vladimir Putin has imposed martial law in the four occupied Ukrainian regions, his latest decree has also introduced a legal base for an effective economic martial law for all of Russia with the establishment of the Coordination Council headed by the technocrat Prime Minister Mikhail Mishustin.

bne IntelliNews has analysed how Kremlin is preparing for a protracted conflict and putting the Russian economy on a war footing and warned that the martial law decrees could mean streamlining the federal and private sector resources towards the war efforts in Ukraine.

Indeed, the Council is a special body endowed with broad powers to ensure “co-operation between the federal executive branch and the regions in resolving issues related to ensuring the needs of the law enforcement agencies during the special military operation [the full-scale military invasion of Ukraine],” the decree reads as cited by Vedomosti daily.

PM Mishustin will have to report to Putin on the Council's progress on a daily basis. The Council's decisions are binding on federal, regional and municipal authorities and "other bodies and organisations", which can also potentially mean any private sector company.

Notably, Mishustin himself mentioned last week that the goals of boosting the military industrial complex output could “involve business [the private sector]”.

The Council is free to set its performance targets and implementation deadlines, such as repair of military equipment, provision of medical and sanitary services, repair, construction and engineering works, etc. The Council will also be in charge of distributing the budget for all these purposes.

The economic bloc on the Council is represented by the presidential aide and ex-EconMin Maxim Oreshkin, currency EconMin Maxim Reshetnikov, the FinMin Anton Siluanov and Moscow Mayor Sergei Sobyanin.

Notably, the Council will also assist in building military infrastructure, co-ordination of digitalisation, automation and information-analytical support in the field of defence, including the creation of databases of conscripts.

In order to do so the Council is granted the right to request materials from authorities of different levels, invite their representatives (and other specialists) to Council meetings, give them instructions, as well as create committees to solve individual issues and propose decisions to the president.

The high-level officials on the council seem to be personally held responsible by Putin for their contribution to the war efforts, as the decree emphasises that the council members have to participate in all of the meetings "without the right to be replaced" (i.e. the transfer of powers to their deputies), Vedomosti notes.

The lawyers surveyed by the daily note an unprecedented "supra-governmental" legal nature of the Council that has the right to override federal and regional authorities and becomes the wartime headquarters. Previously a Co-ordination Council had been set up to deal with the coronavirus (COVID-19) pandemic, but it was established by a government decree, and not by Putin.

In addition, all Russian regions will now have wartime operational headquarters established, overseen by the government with the participation of representatives of security agencies, whose decisions are binding on the regional executive authorities.