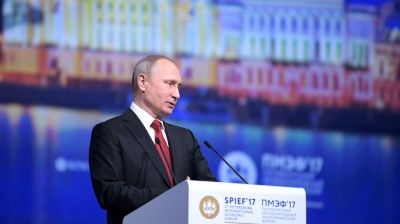 Russian President Vladimir Putin called for the development of IT and other new technologies to be made a priority, in his keynote speech at the St Petersburg International Economic Forum (Spief) on June 2, adding that state-owned companies should work much more closely with innovative startups.

“Russian IT companies are certainly competitive globally,” he said, speaking to a packed plenary session. “Local professionals are not just offering a top-quality software product, but they’re basically creating a new field of knowledge.”

According to Putin, new legislation for the active introduction of digital technology in all spheres of life needs to be created, with a special focus on information security of the government, business and citizens.

“The government will support companies developing digital technology and competences that can be used across various industries,” Putin said. “Those include big data, artificial intelligence and neurotechnology, the internet of things, virtual reality and a few others.”

Infrastructure for the digital economy should be created in partnership between the government and private sector, including secure communication lines and data processing centres, he added.

“At my request, the government has prepared a programme for development of the digital economy,” Putin said. “Now we need to decide on the mechanisms and volumes of financing it.”

“I am sure that startups could become partners of large corporations,” he said. “I am calling on the management of Rostech, Roskosmos, the United Shipbuilding Corporation, the United Aircraft Corporation, Rosatom and other large hi-tech companies to actively use the opening opportunities. There is a need to create departments that will be working with startups and small innovative companies.”

Putin also called on large Russian state companies to set up venture capital funds. He added that a legislative basis for them to acquire stakes in startups will be developed.

In a panel debate at Spief on June 1, Alexander Povalko, chief executive and chairman of Russian state venture capital fund RVC, said Russia was very innovative but “translating that into the technological domain is something we are not that great at”.

The head of Russia’s communications watchdog Roskomnadzor, Alexander Zharov, noted that Big Data has already become a commodity of high demand. But the issue of state regulation in the area remains unsolved, said Zharov, who called for a special regulatory body to be set up for the purpose.

Big Data is a term that describes large volumes of personal data, collected, processed and stored by governments and businesses, and was described by panel members as “new oil” for the digital economy.