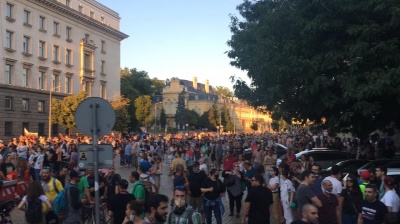 Tens of thousands of Bulgarians kept protesting for the fifth day in a row on July 13, demanding the immediate resignation of the government and the chief prosecutor Ivan Geshev, accusing them of widespread corruption and shielding the interests of alleged criminals who, they claim, control the state authorities.

After seven years of apathy and lack of energy to push for change, Bulgaria, the poorest and most corrupt EU member, was rocked by a series of political scandals showing the deep dependence of the government and Geshev on business circles related to the chairman of honour of ethnic-Turk Movement for Rights and Freedoms (DPS) Ahmed Dogan and his close ally, the controversial businessman Delyan Peevski.

In the fifth day of protests, thousands of people rallied in the ten biggest cities of Bulgaria, while the capital Sofia was flooded by angry people who gathered since the early afternoon.

The protests gained unexpected support from the US embassy to Bulgaria, which issued a short statement.

“The right to peacefully assemble is a fundamental democratic value. Demonstrations and protests are a sign of a thriving, vibrant civil society. Peaceful protest has played a key role in the United States' 244-year-old democracy. Every nation deserves a judicial system that is non-partisan and accountable to the rule of law. We support the Bulgarian people as you peacefully advocate for increased faith in your democratic system and promote the rule of law in Bulgaria. No one is above the law,” the embassy wrote in a Facebook post.

Hero Mustafa, who was appointed US ambassador to Bulgaria in 2019, has said several times that she will focus on top level corruption during her mandate.

On the other hand, the European Commission said it would not comment on the protests in Bulgaria but that it relies on the Cooperation and Verification Mechanism (CVM) monitoring, launched to assess progress in fighting corruption and organised crime, to observe the situation regarding the rule of law. The EC has repeatedly criticised Bulgaria for the lack of progress in the area of the judiciary, particularly in the establishment of a mechanism for control of the chief prosecutor and allow his removal when necessary. Currently, no institution can control the chief prosecutor or trigger an investigation into his actions.

While more and more people are going out to protest, critics have said they lack leaders and specific demands.

On July 13, Democratic Bulgaria – a non-parliamentary coalition that has put as its priority to restore the rule of law and proper working of state institutions among other things — issued a plan to restart the system and said it has the capacity to undertake tough but much needed reforms.

The coalition was behind the last spark that took Bulgarians onto the streets after one of its leaders, Hristo Ivanov, attempted to get to a beach near Dogan’s summer villa, which is officially state property. Ivanov was not allowed to get to the beach and was pushed back to the sea by members of the state security services. Dogan, who is believed to be the most influential politician in the country, does not hold any public post that entitles him to be guarded by the state services.

Among Democratic Bulgaria’s priorities, announced on July 13, are electronic voting, amendments to legislation that would allow citizens to initiate amendments to laws and file complaints to the constitutional court and changes to the procedure for election of the chief prosecutor.

Meanwhile, Democratic Bulgaria demanded the urgent resignation of Interior Minister Mladen Marinov due to the reports of police violence on the second day of protests when several young people were brutally beaten and protesters reported cases of humiliation and unnecessary rude behaviour. The authorities initially have denied these cases but after several videos showing the events were published on social media they launched an investigation, claiming it would take time.