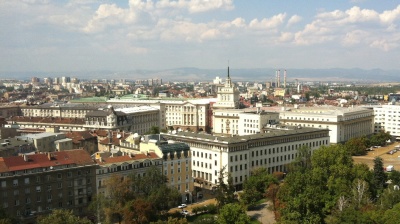 The scandal broke earlier in March, when independent investigative news outlet Bivol.bg published an article saying that Tsvetan Tsvetanov — known as Borissov’s right hand man — had bought an extremely luxurious apartment in Sofia for less than 25% of its market price.

In the following days, the scandal spread. The anti-corruption NGO Anti-Corruption Fund (ACF), in cooperation with Radio Free Europe and Bivol.bg, revealed that other top Gerb members, including Justice Minister Tstetska Tsacheva, Deputy Minister of Sport Vanya Koleva, Parvanov and Vezhdi Rashidov, head of the parliament’s committee on culture and a former culture minister, had all acquired luxury apartments built by the same company, Artex Engineering, again at a very low cost.

Both Tsacheva and Koleva resigned and their resignations were immediately accepted by Borissov.

However, the resignations have so far failed to kill the latest scandal involving the ruling Gerb party, which might be badly hit ahead of the May 26 EU parliamentary election as Tsvetanov, who heads the party’s parliamentary group, is in charge of all Gerb's election campaigns. Only a few people believe that Borissov would be ready to sacrifice him, while most think he will remain in his current positions. This is despite his apartment being the most luxurious of all those bought by top officials, with its own private lift.

Political analysts and activists have noted that this scandal could seriously shake Gerb despite Borissov's removals of most of the involved persons from their positions. Unlike previous scandals that have marked Borissov’s third government, this is an issue close to the heart of the average Bulgarian citizen. People in one of the poorest EU member states often spend a lifetime paying off their mortgages to acquire much cheaper apartments than those acquired by top officials, and for most Bulgarians owning their own home is among their top priorities because of the feeling of security it gives them. Moreover, prices for rented apartments have been rising and at the moment match monthly mortgage instalments.

While ordinary Bulgarians are struggling to buy modest apartments, Tsvetanov bought his luxury apartment of around 200 square metres for just €600 per square metre. He paid by transferring two other apartments to the company that built the apartment, and adding cash.

The building where Tsvetanov and Tsatcheva own apartments, named Letera, is located in one of the most expensive areas in Sofia along with many embassies and residencies of foreigners. The usual market price for apartments in the same building, and in most of the Letera district, is between €2,600 and €3,600 per square metre.

Artex, which built the apartments, admitted selling them cheaply to the politicians, but claimed they were not bribes. Instead, it issued an official statement claiming the deals were legal and did not aim to buy the company political influence.

However, Bivol.bg revealed that Tsvetanov ordered an investigation against the company four days before buying the property. The investigation did not proceed after the deal.

According to the ACF, Tsatcheva acquired an apartment in the same building as Tsvetanov, also for around a quarter of the market price. She claimed that the deal was legal and even pushed the anti-corruption body and the prosecution to investigate it, but also decided to resign.

Unlike Tsatcheva, Tsvetanov claims his deal was completely legal and there was no reason for him to step down or take any other measures.

The anti-corruption commission decided to launch an investigation following a signal from ACF on March.

The prosecutor’s office has asked the anti-corruption body to probe various aspects. The commission will examine the title deeds and will interrogate all those involved.

The investigation also will probe allegations of influence-trading and conflict of interest related to the company and the deals.