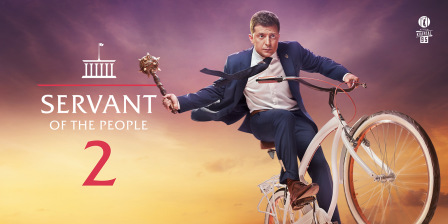 President Zelenskiy's Servant of the People would take 48.2% if election were held on Sunday, close to an absolute majority
By bne IntelliNews June 6, 2019

Five political parties could clear the 5% threshold and enter Ukraine’s parliament, the Verkhovna Rada, in the July 21 general election, according to the Rating agency.

Zelenskiy’s Servant of the People party is on course to repeat the landslide victory of its leader in the recent presidential election, and has widened its lead; Servant would take 48.2% of the vote according to the poll, up form c.30% in earlier polls. A Servant of the People party statement at the end of May said the party would not enter into any election pacts and was going to attempt to win a majority on its own.

That is starting to look like a strong strategy as the parliamentary vote now looks like a repeat of the presidential vote where voters didn't vote for Zelenskiy but in effect voted against everyone else. A parliamentary pact would tarnish Zelenskiy’s “clean hands” outsider image and the party’s very lack of experience ironically works in its favour.

The other parties are all sliding in the polls. In second place is the pro-Russian Opposition Platform 10.7%), followed by former president Petro Poroshenko’s rebranded European Solidarity (7.8%).

Despite her recent calls for support, opposition leader Yulia Tymoshenko’s Fatherland has lost more ground and slid to 6.9%. Tymoshenko remains a divisive figure in Ukrainian politics, but her star seems to finally be waning.

Another new party on the block is celebrity rock star Svyatoslav Vakarchuk’s Golos (Voice) party, which would scrape in with 5.6%. Vakarchuk was widely expected to run for president and could have challenged Zelenskiy for the job. However, while his parliamentary bid has been widely anticipated by liberal observers, its seems the campaign is off to a slow start.

Other parties that can hope to pass the 5% barrier if they gain a few more votes include the Strength and Honour party of former  Security Service of Ukraine (SBU) chief Ihor Smeshko (4.3%), the Civic Position party (3.0) and the Radical party (2.4%).

“This poll paints a picture of a Rada that might look extremely different from the one Ukraine has now. Most striking is the score of Vakarchuk’s newly created party, Golos. The rock-star was polling at a mere 1% just a few weeks ago, but could now replace Samopomich as the main "liberal" opposition party. Another new political project, Ukrainian Prime Minister Volodymyr Groysman’s “Ukrainian strategy” party, is struggling badly however and could gather as little as 1.3% of the vote,” BMB said in a note.

Should Zelenskiy's group win an absolute majority in the Rada by itself, which would be an unprecedented event in Ukraine's post-Soviet history, that would clear the way for very radical reforms. Much of the reform process has been hamstrung by endemic corruption and oligarchs that have stuffed the chamber with their proxies.