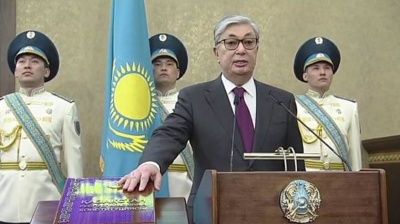 Tokayev is sworn in following a rambunctious election period.
By bne IntelliNews June 27, 2019

It’s fair to say Kassym-Jomart Tokayev didn’t have the most tranquil of starts as he took over the presidency from long-time ruler Nursultan Nazarbayev—around 4,000 people were arrested during unauthorised demonstrations on and around election day in early June, though authorities at first only admitted to about 1,000—but on June 26 he went some way to defusing some tensions by ordering his government to help half a million low-income borrowers repay their bank debts.

Speaking to reporters in the Kazakh capital Nur-Sultan on June 26, Tokayev added officials were aiming to eventually assist one sixth of the Kazakh population, or over 3mn people, with debt relief amounting to a total of “a bit less than $1bn”.

Economic dismay, as well as disappointment that Kazakhstan could only manage a sham election with opposition forces largely kept out of the contest, fuelled countrywide protests that eventually fizzled out in the days after shoo-in candidate Tokayev was elected, following the introduction of unofficial ‘semi-curfews’. The green-lighting of debt relief is the first major decision to emerge from Tokayev’s presidential office. What may have driven the new president to announce the decision was the public attention given to this week’s munitions depot explosions at a military base in Turkestan Region, which forced a nearby town of 45,000 people to evacuate, injured 89 and killed three.

Tokayev’s order is set to completely wipe out debts for around 250,000 people and ease the debt burden of the remaining half by $800 available per eligible borrower, Tokayev’s office said in a statement. In 86% of cases, the loans amount to less than KZT1mn ($2,650), while they average around KZT300,000, the statement said.

The president noted the measure is aimed at “people who find themselves in very difficult living circumstances”. In a decree, the presidential administration estimated that about 500,000 people can’t manage their debts.

Multiple protests were even held in the largest Kazakh cities from February prior to Nazarbayev’s resignation. February ended with Nazarbayev announcing a $3.6bn drawdown from the country’s rainy day fund to mitigate some economic hardship. It is unclear whether the debt-relief is part of that drawdown, which was mostly aimed at raising public sector salaries and pensions around the country. Also unclear is whether these measures will be sufficient to keep public discontent with the regime, in which it is commonly thought Nazarbayev is pulling the strings from behind the scenes, from growing.

Not a fan of bailouts
Despite lingering troubles in the nation's banking sector, Tokayev told reporters in Nur-Sultan that his “attitude is that there should be no governmental bailouts”.

“My assessment of this issue as a president is that the government should not get involved any more, any longer, with loans as far as private banks are concerned,” he said.

In the past couple of years, the government has bailed out banks with an approximate total of $8.5bn. Measures have also included mergers between largest lenders and between smaller banks. The latest bailout, held in 2018, was directed at the country’s second biggest lender, Tsesnabank, and cost more than $1bn.

The central bank has recently been conducting a review of asset quality in the banking sector, leading to speculation that another round of bailouts might be around the corner.