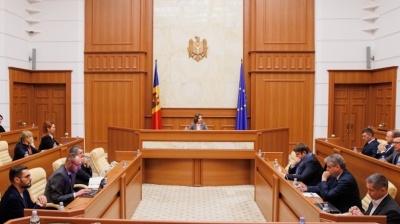 Major blackouts in Moldova have been so far prevented, but remain likely, as the country faces what President Maia Sandu called the “worst energy crisis in its history”.

The country lost its imports from Ukraine after Russian forces attacked Ukraine’s energy infrastructure, and a cut in Russian gas exports to Moldova forced the main power plant in the separatist Transnistria region — which previously supplied around 70% of Moldova’s electricity — to cut production.

“Moldova is currently facing the worst energy crisis in its history and getting through the coming winter depends on each of us," President Maia Sandu said at the beginning of the meeting of the Supreme Security Council (CSS), convened on October 24 to discuss current threats to energy security, according to a statement issued by the presidency on October 25.

This situation is forcing the government of Moldova to constrain the use of electricity in private and public institutions.

Industrial companies are asked to reschedule their energy-intensive processes outside the peak hours and residents are asked not to use elevators during the same peak hours in order to avoid being trapped due to blackouts, under a decision of the exceptional situations commission (CSE).

Gazprom reduced gas exports by 30% at the beginning of October, and may make a further cut in November. The winter hasn’t started yet and Moldova’s short-term alternatives to Russian gas are technically limited.

The MoldGRES power plant in Transnistria is controlled by Russia’s InterRAO, but it operates in the separatist region, which has so far acted to prevent any unnecessary conflict with the authorities in Chisinau since the start of the war in Ukraine. The tensions related to splitting the scarce gas supplies from Russia between Transnistria and the rest of Moldova, so far muted, may increase if Gazprom further reduces its deliveries as of November 1.

Also in October, Russian drone attacks on Ukraine’s energy infrastructure left over a million Ukrainian households without electricity. The targeting of Ukraine’s electricity grid means it is now unable to continue exports to Moldova.

Technical problems at MoldGRES power plant in separatist Transnistria — the main source of power for Moldova proper — forced the power grid operator to ask for more support from Romania on October 25, which assisted with balancing the system for the loss of 100MW between 9:30 and 12:00.

Romanian Prime Minister Nicolae Ciuca estimated that Romania can deliver some 5mn cubic metres of gas per day, but this might still not be enough during the winter period if Gazprom cuts its deliveries and even Romania needs gas during the cold winter days when the rate of extraction from own deposits is not enough.

Energocom had already signed a 100MW contract with Romania’s Hidroelectrica a couple of weeks earlier. All Romanian producers are compelled to sell electricity to Moldova at a price not higher than RON 450 (€90) per MWh — which is the price cap for the domestic market as well. But technically the interconnection between the two countries cannot bring electricity at a rate higher than 225MW in Moldova, even assuming that the 100MW supplementary capacity announced by Romania recently is stable (until now, the interconnector was rated at 125MW, but 100MW were added, possibly making use of parts of Ukraine's grid).