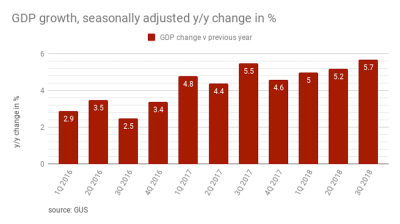 Polish GDP growth pushed to a seasonally adjusted 5.7% y/y in the third quarter, a flash estimate released by the Central Statistical Office GUS on November 14 showed.

The result is a surprise to the upside, as consensus predicted a slowdown in the second half of the year after dynamic expansion in the first six months.

Inventories could prove another factor contributing positively to growth while net exports were negative or neutral, the bank added.

A detailed breakdown of the flash reading – together with a possible revision of the data – is scheduled for publication on November 30.

The economy expanded by a seasonally adjusted 1.7% q/q – 0.6pp above the q/q reading for the second quarter – while growing an unadjusted 5.1% y/y, GUS also reported.

The very strong growth figure in the third quarter is having some analysts revise their forecasts for full-year growth in 2018.

“Growth in 2018 could be at least 5% even though we are expecting economic expansion to slow down in the coming quarters mainly due to the weakening sentiment in international trade,” Santander Bank Polska said.

The accelerating economy could also bring forward the tightening of the monetary policy cycle, according to Capital Economics. Poland's rates have lingered at a record-low 1.5% for over three years now with moderate inflation despite rising wages.

Russia Services PMI bounces back to 47.8 in June, up from 35.9 in May
Governor Smolii’s departure from the NBU creates the risk of devaluation of the hyrvnia or default on its debt this year
Ukraine cancels dollar bond sale after NBU governor resigns