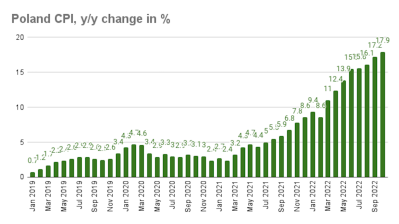 The reading added 0.7pp to September’s growth, taking Poland’s inflation closer to the 20% mark amidst worries that it may take as long as until the second half of 2023 for price growth to begin easing.

“CPI inflation may stabilise in the next two months but it will start increasing again in the beginning of 2023 due to statistical effects,” PKO BP said in a comment.

“In the second half of 2023, we expect inflation to decline thanks to fading shocks and the economic slowdown, which will make it difficult to raise prices,” PKO BP also said.

Accelerating inflation poses a continued dilemma for the National Bank of Poland (NBP) of moving forward with more monetary tightening at a time when the economy is already slowing markedly. The NBP paused rate hikes in October, keeping the reference interest rate unchanged at 6.75%.

Analysts say that the central bank’s new inflation and GDP projection – released twice a year in March and November – will determine the further course of monetary policy.

“Core inflation picking up to an estimated 11.1% y/y in October may provide grounds for a 25bp hike,” PKO BP said.

The increase in the inflation rate came on the back of sharp growth in all major components, GUS showed in the breakdown of the data.  Food prices grew 21.9% y/y in October, the flash estimate said – a pick up against a gain of 19.3% y/y in September.

Energy price growth eased slightly to 41.7% y/y in October after growing 44.2% y/y the preceding month. After easing in September, fuel prices picked up growth again to 19.5% y/y in October, compared to a gain of 18.3% y/y in September.

Prices of food and non-alcoholic drinks accelerated growth by 1pp to 2.7% m/m in October.  In the energy segment, price growth eased to 2% m/m from 3.7% m/m the preceding month. Fuel prices expanded 4.1% m/m after growing 2.1% m/m in September.