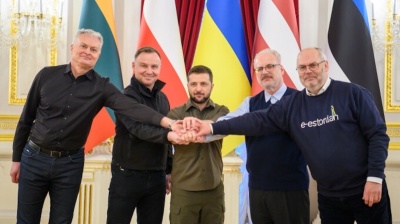 Ukraine should become a member of the European Union as soon as possible, the presidents of Poland, Lithuania, Latvia, and Estonia said in Kyiv on April 13.

The presidents were the first heads of state to visit Ukraine since Russia’s attack on the country in late February and the latest in a series of visits by other leaders recently, as Kyiv is seen coming back to life after Russia conceded defeat over its plans to capture the capital.

“We came here to stand with President Zelenskiy and tell him that we admire his and his people’s resolve in defending Ukraine,” Polish President Andrzej Duda said.

“The fight for Europe’s future is happening here on the Ukrainian soil in this very moment,” said Lithuanian President Gitanas Nauseda.

Duda and his Baltic peers all called for Ukraine’s membership in the EU. Ukraine inched towards candidate status earlier this month, following a visit by the European Commission President Ursula von der Leyen.

The four presidents also reiterated a call to send Ukraine more weapons. Sending in arms fast is seen as crucial to the war’s outcome, as following its withdrawal from northern Ukraine, the Russian army is regrouping and reinforcing to launch an offensive in the eastern region of Donbas.

“The fate of Ukraine will be decided on the battlefield,” Nauseda said.

Prior to a working lunch with Zelenskiy, the presidents visited Borodyanka, a Kyiv suburb that suffered destruction and loss of life at the hands of Russian troops. That prompted calls for alleged Russian war crimes to be prosecuted by the international community.

“I firmly believe that every single crime committed by the Russian army will be assessed and the perpetrators will be tried at the International Criminal Court in The Hague,” Nauseda said.

“Sooner or later, every murderer and rapist will be brought to justice,” he added.

The presidents also said more and harsher sanctions are needed on the Russian economy to raise the cost of war for President Vladimir Putin.

The EU has been long bickering over a blanket ban on oil and gas imports – seen as having the most potential to throw a spanner in the works of Russia’s war machine – but opposition from Germany, Austria and Hungary, all major buyers of Russian energy commodities, is thwarting the effort.

“It’s only a matter of political will,” Nauseda said.

Zelenskiy thanked the visitors, saying that “with friends like these, Ukraine will be victorious.”

But the Ukrainian president seemed a little bitter when he said that he needed security guarantees, as Ukraine is not a Nato member.

“Perhaps we would be in Nato if President Nauseda became Nato’s secretary general,” Zelenskiy quipped.

Earlier, Zelenskiy warned in a Twitter post that “without additional weaponry, this war will become an endless bloodbath, spreading misery, suffering and destruction.”

“Mariupol, Bucha, Kramatorsk – the list will be continued,” Zelensky added, referring to locations where the Russians have targeted civilians. Tens of thousands are believed to have been killed in the besieged Mariupol alone.

“Nobody will stop Russia except Ukraine with heavy weapons,” Zelensky said.

On April 13, US President Joe Biden announced new military assistance for Ukraine, including artillery systems, armoured personnel carriers and helicopters. The assistance will be worth $800mn on top of some $1.7bn pledged previously by Washington.

France and Germany, as well as the Czech Republic, Slovakia and Poland, have also either sent or are about to send weapons to Ukraine as well.