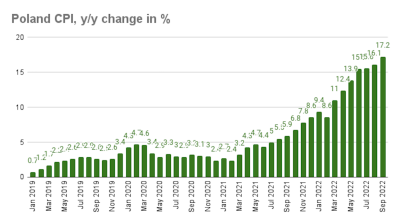 Polish CPI growth came in at 17.2% y/y in September (chart), picking up sharply by 1.1pp versus August, the statistical office GUS said on October 14.

The reading confirms GUS’s flash estimate published earlier this month and indicates that Poland’s inflation woes are poised to get worse. At the same time, the National Bank of Poland (NBP) is mired in internal conflict over its monetary policy while analysts say that the government’s fiscal stance is pro-inflationary, effectively cancelling out the NBP’s work.

The outlook on inflation assumes further growth – fuelled by expensive energy – until a peak of around 20% y/y in February.

But analysts are undecided whether the NBP will resume tightening after an October pause kept the rates at 6.75% or will continue in the wait-and-see mode.

“From Q2 2023, inflation may start to decline slowly, but it is unlikely to hit single-digit levels before the fourth quarter of 2023, and perhaps not even before the end of the year,” Santander Bank Polska said in a comment.

“In our opinion, in such circumstances, the NBP will decide to raise interest rates by 25bp in November and then again in early 2023,” Santander also said.

Prices in the second most-weighted segment, housing and energy, led growth of headline inflation in September, accelerating expansion to 29.9% y/y in September, compared to 27.4% y/y in August. The figure included massive increases of 172.2% y/y for heating fuels and 35.6% y/y for natural gas.

In the transport segment, prices went north 16.4% in September, easing from 19.4% y/y the preceding month.

In m/m terms, price growth came in at 1.6% in September, double the monthly expansion rate registered in August.

Inflation and the central bank's fight with it are now a serious political challenge for the government, as price growth is eating into Poles' incomes. At the same time, the NBP's monetary tightening has pushed up mortgage repayments significantly.

The NBP left its reference interest rate unchanged in October, however, citing concerns over the impact of further rate hikes on economic growth.

That sparked an internal disagreement in the Monetary Policy Council (RPP), the central bank’s rate-setting body.

Three rate-setters – notably appointed by the opposition-held Senate – criticized the RPP’s approach as too lenient and in fact misinforming public opinion about ways out of the inflation crisis.

One of the critical voices, Joanna Tyrowicz, went as far as saying that the NBP’s claims that inflation is collateral of Russia's war in Ukraine – as it pushed up energy prices – are false, as inflation is demand-driven.

Still, an economic slowdown is very much on the cards. Poland’s GDP growth is expected at just 1.5% in 2023 after growing an estimated 4% - 5% this year. Some analysts – the International Monetary Fund’s, for example – are putting next year’s expansion at just 0.5%.

Hungary’s GDP growth slows to 4.0% in Q3
18 hours ago
Poll shows only one in five Moldovans happy with their government
19 hours ago
Montenegro’s tourist arrivals almost double y/y in October
19 hours ago
LNG in Europe: ready or not?
19 hours ago
Russia’s GDP at 4.4% decline in October, construction and agro stick out
19 hours ago