Poland is heading for elections on October 25 with a sense of déjà vu. Once again, they will be a battle between the centrist Civic Platform (PO), which has led a coalition government since 2007, and the right-wing Law & Justice party (PiS). This time, though, PiS looks set to win. Ewa Kopacz, who took over as prime minister from Donald Tusk a year ago, has been trying to cut her losses. But it may be too late. A month before the elections, polls give PiS a lead of over 10 percentage points over PO (other parties, including the main left-wing coalition, remain below 10%).

The return of PiS after eight years in opposition would have major repercussions at the national and European level. Critics remember its previous stint in power, in 2005-2007, as characterised by paranoia at home and abroad. After years of moderate rule by the PO-PSL coalition – the policy of “warm water in the tap”, as Tusk put it – Polish politics could be in for a shake-up.

PiS has received something of a facelift in recent months. Veteran leader Jaroslaw Kaczynski, who served as prime minister in 2006-2007, remains at the helm. But the surprise victory of the milder, youthful Andrzej Duda in May’s presidential election prompted him to rethink his strategy. Rather than try to return as prime minister himself, Kaczynski nominated Beata Szydlo as the party’s candidate for prime minister. Szydlo, a 52-year-old deputy leader of PiS, rose to prominence managing Duda’s election campaign and is less divisive than Kaczynski.

PiS’ programme shows that the “right-wing” label usually ascribed to it in English can be misleading. Though conservative on social issues such as gay marriage and abortion, its economic programme is more leftist. While not strictly Eurosceptic, PiS remains staunchly opposed to the euro.  By adopting it, Poland could become “another Greece”, Szydlo warned.

With the big day looming, PiS and PO have attempted to outshine each other with economic proposals. At times their election conventions, which both took place on September 12, resembled a bidding contest. For instance, both want to introduce a minimum gross hourly wage of PLN12 (€3). Szydlo unveiled a new election slogan for PiS in September: “Work, not promises”. Nevertheless, its spending plans have been particularly lavish. Analysts are wondering where all the money is going to come from. “Lots of slogans, few details,” wrote Pracodawcy RP, an employers’ organisation, commenting on both parties’ proposals in a statement after the election conventions. This vagueness undermines the credibility of even the more sensible proposals, it added. 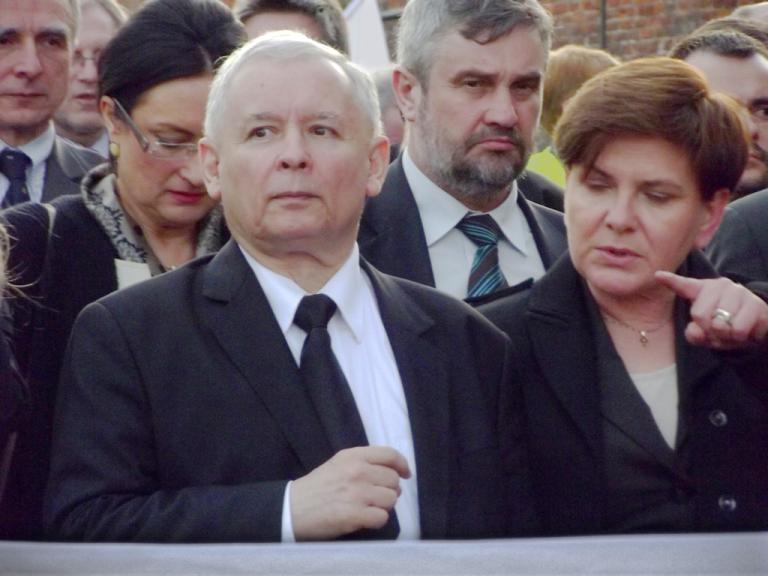 In an effort to court the poorest levels of society, PiS wants to raise the tax-free amount to PLN8,000 a year, from the current level of around PLN3,000. Local government budgets, which rely heavily on revenue from personal income tax, would be particularly hit. Warsaw itself could lose PLN840mn. Key investment projects, such as the extension of the capital’s second metro line, could be affected, Warsaw’s mayor Hanna Gronkiewicz-Waltz has warned. In nod to families, PiS is also proposing a “Family 500+” programme that would give families monthly support of PLN500 (€120) per child, starting with the second child in better-off families. This would serve as a “demographic impulse” while helping families in need, according to Szydlo.

In addition, PiS wants to reverse the PO government’s raising of the retirement age, returning it to 65 for men and 60 for women. An indirect way of doing this would to link the retirement age to the number of years worked.

Taken together, these proposals would be “devastating for public finances”, warns Adam Czerniak, chief economist at Polityka Insight, a think-tank in Warsaw. More broadly, PiS’ “unrealistic” spending programme could prompt a negative reaction from financial markets and reduce Poland’s credibility, he warns.

To fill this gap, PiS intends to turn on Poland’s banks. It has contemplated a tax on banks’ assets, which has drawn criticism from the banking sector. An alternative would be a tax on financial transactions (0.14% of transaction value on securities and 0.07% on derivative transactions). While the latter tax would bring in several times’ less revenue, it would also be less damaging to Poland’s financial sector, Czerniak points out. How either would cover all of PiS’s promises is unclear, though.

Although attention has focused on the bidding war taking place between PO and PiS over spending policies, the campaign takes place in a broader international context, from Europe’s migration crisis to the tense security situation in the region since Russia annexed Crimea.

Since taking office in August, Andrzej Duda has been the focal point of PiS foreign policy – though he formally left the party shortly after he was elected. Amid concerns that he would return to the confrontational antics of PiS’ previous stint in power when the late president Lech Kaczynski was in office, Duda announced that there would be “no revolution”, just “corrections, sometimes deep”. The tone of Duda’s visit to Berlin in August, soon after taking office, was positive. “I have absolutely no doubt that our great task, my task on the Polish side, is to build the best-possible strategic relations with Germany,” he said. This sets a positive tone for the rest of his presidency and, potentially, for a future PiS government.

On the situation to Poland’s east, PiS does not differ greatly from the current PO-led government. Both parties support Ukraine’s reform efforts and are hawkish over Russia. Still, following Duda’s lead, PiS could seek a more assertive role for Poland in the Ukraine peace talks and in European diplomacy more generally. Visiting Tallinn on his first trip abroad as president, Duda said that Nato in the region is “justified not just in historical but in present-day terms”. Regional security is likely to figure prominently in the next government’s foreign policy in the run-up to the next Nato summit, which Warsaw will host in July 2016.

One area where PiS has distanced itself clearly from the government is the refugee issue, which has emerged as a major theme in the last months of the election campaign. Kaczynski has questioned the government’s right to decide on the matter, and was infuriated by its decision on September 22 to back a controversial EU plan to relocate 120,000 migrants over the next two years. Szydlo has suggested that rather than taking in refugees from the Middle East, Poland ought to focus on repatriating ethnic Poles from the former Soviet Union. Amid widespread anti-immigration feelings in Polish society, this stance could further boost PiS ratings ahead of the election. At the same time, it spells tensions with key partners in Western Europe if PiS comes to power.

After eight years in opposition, many questions about what PiS would be like in power remain. Yet its inward-looking and xenophobic response to Europe’s migration crisis suggests that, for all the party’s face-lifting attempts in recent months, some things have not changed since its last spell in power.

Wojciech Kość in Warsaw -   Poland’s Law and Justice (PiS) party, which won an outright majority in the parliamentary elections on October 25, has announced a hardline ... more

Wojciech Kość in Warsaw -   The Law and Justice (PiS) party, which won an outright ... more