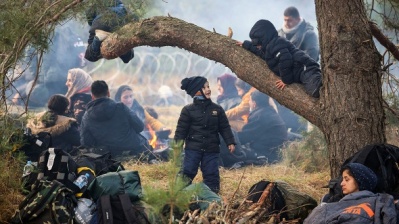 Some 2,000 refugees from the Middle East are camped out on the Polish-Belarusian border in the worst clash between the two countries in the refugee crisis to date. / wiki
By bne IntelIiNews November 10, 2021

Lithuania’s parliament declared a state of emergency at the country’s border with Belarus on November 9. The Baltic country has closed the border to prevent migrants seemingly deployed by Minsk crossing into its territory. Russian Foreign Minister Sergei Lavrov, meanwhile, has suggested that the EU pay Belarus to keep the refugees on its side of the border to end the crisis.

Lithuania’s state of emergency came into effect at midnight last night and will last a month. The declaration of a state of emergency allows border guards to exercise extra powers. They can use “mental coercion” and “proportional physical violence” to prevent migrants from entering Lithuania.

Poland likewise recently passed an emergency law that declared the migrants' efforts to enter and apply for refugee status “illegal” and suspends the usual refugee processes under EU law, while giving police and guards at the border the power to prevent migrants crossing with force if necessary.

The beefing up of these security measures has drawn criticism from human rights groups that claim they are illegal and ignore EU rules on processing refugee applications.

Lithuania’s declaration bans all travel to within 5 km of the Belarus border, unless allowed by border guards. Mobile phones can be taken away from migrants and public gatherings near the border and in the camps can be forbidden.

“The state of emergency is needed to use ... extraordinary measures to remove the serious threat posed to society by the massive influx of foreigners,” the motion before parliament said, as cited by Reuters.

The measures would also deter anyone seeking to aid migrants, Prime Minister Ingrida Simonyte told Parliament. “People who live and work (near the border) will be able to continue to do so, but people who want to get there to, for instance, pick up the migrants and ferry them to another territory – it will be harder for them to do so,” Simonyte said, as reported by Reuters.

Polish officials also closed the crossing with Belarus at the border town of Kuznica where some 2,000 refugees were camped out in the woods by November 9.

"Sealing the Polish border is in our national interest. But today the stability and security of the entire EU is at stake," Poland's Prime Minister Mateusz Morawiecki wrote on Twitter, as cited by DW. "We will not be intimidated and will defend peace in Europe with our partners from Nato and EU."

The Polish border with Belarus is experiencing an unexpected influx of migrants that began yesterday. Poland reports more than 2,000 refugees are attempting to cross into the country using the Kuznica border crossing, and the Lithuanian border service said there may be as many as 5,000 to deal with. Poland unilaterally closed the border checkpoint. Belarus responded to that move by saying it “does not see any objective reason for making such a decision.”

Poland has blamed Moscow for masterminding the refugee crisis.

"This attack which Lukashenko is conducting has its mastermind in Moscow, the mastermind is President Putin," Morawiecki told lawmakers.

Lavrov suggested on November 9 that the EU pay Belarus to keep the refugees on its side of the border.

He cited a 2016 deal under which the EU provided funds to Turkey, which promised to take back migrants and refugees who crossed the Aegean to enter Greece illegally. The EU has paid billions of euros to Ankara to prevent waves of refugees crossing the EU’s external border. Turkey has become home to at least 3mn refugees from the war in Syria. Turkish President Recep Tayyip Erdogan has used the threat of sending the refugees northwards to exert pressure the EU several times since.

Countries from which refugees enter the EU "should be treated the same," said Lavrov.

"Yesterday during certain political expert discussions it was said: why when refugees were coming from Turkey did the EU provide financing so that they stayed in the Turkish republic? Why is it not possible to help the Belarusians in the same way?" said Lavrov on November 9.

Polish government spokesman Piotr Muller blamed the influx on Belarusian special services, and Nato claimed what was occurring was a tactical use of migrants to put pressure on the EU in retaliation for sanctions. The sanctions were imposed after Belarus forced a Ryanair plane to land and detained oppositionist Roman Protasevich.

Minsk was allegedly issuing special visas to allow refugees from countries such as Syria, Afghanistan, Iraq, Nigeria and many others. Upon arrival, migrants report being sent to the Polish border by Belarusian officials. Lukashenko denies there is such a scheme, BMB Russia reported.

Poland reinforced the border with 12,000 troops and declared a state of emergency in the region with a media blackout. The Lithuanian State Border Guard Service said that Lithuania would redeploy troops to its border with Belarus as well.

There have been altercations between migrants and Polish border security, and tear gas was used against migrants attempting to forcibly cross the border. Polish Deputy Foreign Minister Piotr Wawzhik said: “I am convinced that the Belarusian authorities are seeking a conflict that will lead to casualties on at least one of the sides.”

This influx of migrants is not entirely new for the Polish-Belarusian border; Polish authorities report that, since the beginning of October, migration from Belarus to Poland has amounted to up to 500 people per day. In mid-October, Poland voted to expel migrants back to Belarus rather than house them in guarded camps.

In response to the situation, Russian press secretary Dmitry Peskov said: “We have no doubt that the migration services of Belarus are taking all the necessary measures so that the situation remains legal.” This statement comes just days after President Putin and President Lukashenko met on November 4 and officially approved 28 union programmes aimed at integrating the states’ economic policies.