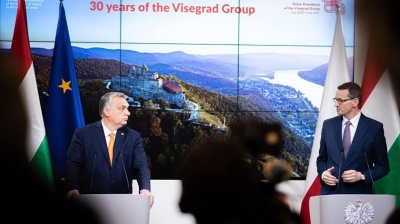 Leaders of EU member states brokered a deal on the €1.8 trillion budget and COVID-19 recovery fund during the summit on December 10 after Poland and Hungary backed down from their opposition to tying the funds to respecting the rule of law.

Poland and Hungary said they would veto the €1.1 trillion budget and the €750bn recovery fund if access to money was made conditional on the rule of law, undermining which has landed both countries under the scrutiny of the European Commission.

The rule of law clause did remain in the conclusions of the summit but was tweaked to remove Polish and Hungarian objections that it would become a tool of political pressure rather than a mechanism of legal safeguarding.

Linking the rule of law to funds will be governed by an objective process and limited only to the proper use of the bloc’s money. Poland and Hungary will also be entitled to review the mechanism in court to make sure it is in line with EU treaties.

Governments in both countries have long been at odds with the rest of the bloc for attacks on their judiciaries and undermining the independence of the media.

Vetoing the budget and the recovery fund would, however, result in Poland and Hungary losing billions in EU funding in the next seven years, a period spiked with difficulties of emerging from the coronavirus pandemic and implementing bold EU-wide reforms, such as the transition to a low-carbon economy.

The agreement was reached a few hours into a summit meeting in Brussels, and was announced by the President of the European Council Charles Michel.

"Now we can start with the implementation and build back our economies," Michel said, adding that “our landmark recovery package will drive forward our green and digital transitions.”

After reaching the compromise, Poland’s tripartite coalition government is in for more tension.

United Poland, one of the parties in the coalition led by Law and Justice (PiS), reiterated on December 10 that linking the budget with the rule of law strips Poland of its sovereignty and must not be accepted. “We will meet to discuss the effects of the decision made by the [EU] summit,” the party — which threatened to leave the government if the rule of law mechanism stayed — said in a statement.

In a video message on his Facebook page, Orban said everybody at the negotiations had "played their last card". "We achieved three things. We defended the European Treaties. We eliminated the danger of using fiscal instruments to force decisions on Hungary that it does not want to take or accept, and we defended the Hungarian money that will support economic development in the coming years," he said.

Hungary is expected to receive €8bn non-refundable grants from the recovery fund in addition to the €10bn in loans. Before the deal, the Hungarian prime minister floated the idea that the country could do without these funds. In early November, Hungary’s state debt manager unexpectedly tapped the bond market with a €2.5bn issue. Analysts said this was a "plan B" for Orban to allow Budapest to secure financing for future years should talks over the budget collapse.

Although Hungary’s illiberal leader has sought to avoid any reference to linking EU values to the payout of funds he agreed to the German proposal as it provides concessions and many legal assurances.

Independent media also pointed out that Orban went against his own parliament. Before the July EU summit, lawmakers approved a resolution that the government cannot approve any deal that links the EU’s financial resources to political or ideological conditions.

At the end of the budget debate, Orban’s critics in the EU can also communicate that the rule of law criteria was ultimately included in the package. One of them was Dutch Prime Minister Mark Rutte, who proposed strict conditions for the approval of the €750bn economic recovery fund during the July summit. Rutte did not raise objections to the deal on Thursday, according to sources.

Under the compromise agreement the rule of law mechanism will not be used until Hungary and Poland have the chance to challenge its legality in the EU's top court and get a verdict. This concession to Budapest and Warsaw means that the implementation of the mechanism will be delayed by years. The text also stipulates that the mechanism only applies to the 2021-2027 EU budget and recovery fund.

The scope of the mechanism has also been limited: in essence, it will only apply to fraud, corruption and conflicts of interest affecting EU money and not to perceived rule of law breaches in general.

This means that under the agreement the government will not face tighter scrutiny over the use of funds before the 2022 parliamentary elections.

Critics of the deal say that the EU has let Hungary and Poland off the hook by delaying the legal enforcement of any possible misuse of EU funds.

"The European Council will strive to formulate a common position" should a country facing penalties request a discussion of its case, according to the text in the agreement. Hungary and Poland requested that sanctions at the European Council were made with a unanimous vote but this was rejected.