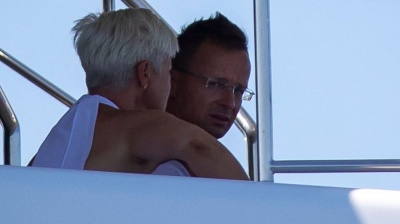 Hungarian Foreign Minister Peter Szijjarto posted pics if himself in a suit in an office environment which was taken on a luxury yacht of an oligarch in Croatia.
By Tamas Szilagyi in Budapest August 18, 2020

Investigative news site Atlatszo, one of the few independent media outlets in Hungary, released photos showing Foreign Affairs and Trade Minister Peter Szijjarto on board a luxury yacht owned by oligarch Laszlo Szijj on the Adriatic Sea off Croatia.

The ministry tried to play down the scandal saying that Szijjarto was working during his holiday in Croatia. He was speaking to a number of foreign ministers over the phone, discussing investment incentive schemes and the Belarus scandal, his spokesperson said.

Hungary's top diplomat regularly posts pictures of his meetings on social media. In his recent post from Monday, he is seen in a suit in what looks like an office environment.

It turns out that the picture was taken onboard Lady MRD, a HUF7bn (€20mn) yacht owned by Laszlo Szijj, a construction industry mogul, in the northern part of Dalmatia in the picturesque Kornati archipelago.

According to the Atlatszo report, it took five to 10 minutes before crew members noticed journalists working from a boat. They approached them on a jet ski. There were no reports of any conflicts. A couple of minutes later the yacht disappeared from the radars as its automatic identification system (AIS) was switched off.

Laszlo Szijj is ranked the seventh richest man in Hungary with net assets worth HUF120bn.

The 62-year-old has risen to the business elite that amassed fortunes through state contracts through strong ties with the ruling Fidesz party after 2015 when Prime Minister Viktor Orban's long-time friend and ally, the former tax office chief and party cashier Lajos Simicska, turned against him.

Since then his company Duna Aszfalt has raked in hundreds of billions in state tenders.

His company realised HUF24bn in profit on HUF157bn revenue in 2019, up from HUF18bn and HUF129bn respectively in the previous year. Szijj is also the second-largest shareholder in MKB, a bank owned by Lorinc Meszaros, who is widely referred to as Orban's proxy. The assets of Hungary's richest man amount to around HUF400bn.

Szijjarto's trip to Croatia also raises questions about the credibility of the large-scale campaign by the government and personally by Orban to urge  Hungarians to stay in the country for their holidays. The prime minister said in his regular interview with state media that the way to keep the pandemic under control is "more Balaton, less Adria".

In other words, people should choose the popular Lake Balaton resort instead of Croatia, although "Hungarians understandably have a desire to see the sea at least once a year", he said.

Orban uploaded photos to Facebook earlier this month that suggest that he stayed at the luxury Balaton estate of his son-in-law, Istvan Tiborcz, whose company BDPST Group is 91st on this year’s 100 most valuable companies owned 100% by Hungarian investors.

After a week of silence, Hungary officially unveiled its stance on the Belarus crisis. In his Facebook post from Monday, Szijjarto said that Hungary backs Poland’s call for a new presidential election in Belarus, which should be held under international monitoring.

Budapest remained silent after news of the possible rigging of the elections and the subsequent protests and police brutality against protestors. It is the only EU member state to disagree with further sanctions against the regime.

Orban has established a cordial relationship with Belarus' President Alexander Lukashenko and this was demonstrated during his visit to the country in June.

"I have confirmed our agreement that our two peoples and two countries are much closer to each other than we tend to think," he said after a meeting with the Belarus president.

A dozen countries refused to recognise Alexander Lukashenko as the legitimate president of Belarus after he secretly inaugurated himself on September 23. Tensions were high in Minsk after the news broke and spontaneous protests erupted.