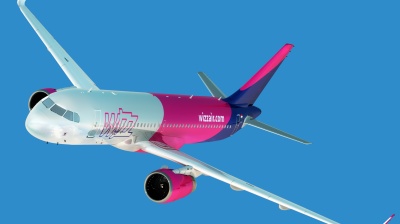 Passenger traffic at Budapest's airport slowed, but it remains the fastest growing airport in Europe
By Levente Szilagyi in Budapest April 9, 2019

Airport operator Budapest Airport earlier said it expects passenger numbers to moderate to 5-10% in 2019, down from double-digit growth in previous years.

Passenger traffic to and from Budapest rose from 13.1mn in 2017 to 14.9mn last year, an all-time high. The 13.5% annual growth made the Hungarian capital the fastest growing airport in the region. Since 2013 traffic has doubled.

The popularity of discount airlines has helped Hungary's tourism industry break records year in year out. Wizz Air and Ryanair accounted for half of the turnover of BA in 2018.

To keep up with the dynamic growth in traffic, Budapest Airport continued its development program BUD2020 this year, a HUF50bn investment project for upgrading and extending the airport infrastructure.

From April Wizz Air will fly daily to London Gatwick, bringing the airline's traffic to over 100,000 seats to the UK’s second-largest airport.

Wizz Air will also operate 4 weekly flights to the Norwegian capital. It currently operates a flight to Stavanger.

Cargo volume in the first three months was down 3.5% y/y to 32,000 tonnes, BA announced on Monday, without details.

Besides a surge in passenger traffic, Budapest has seen a cargo boom in recent years with double-digit growth. Cargo volume increased by 14.9% to 146,113 tons in 2018, up from a record 127,000 tons in the preceding year.

BA began the construction of the first 20,000sqm phase of a new logistic base Cargo City in December. The €32mn logistics facility is part of a €187mn development program at the airport and is due to complete in the third quarter of 2019.

The construction of the logistics base is seen as part of the strategy to make Hungary a major cargo hub for the CEE region.

Courier companies, DHL, TNT, FedEx achieved outstanding results partially due to the development of e-commerce in Hungary and Central Europe.

In related news, Luxembourg-based cargo airline Cargo announced last week that it has doubled weekly connections between Hong Kong-Budapest-Luxembourg from three to six. The flights will be complemented by two new weekly connections from Zhengzhou that will stop over in Budapest before continuing to Luxembourg.

These frequencies will considerably increase the airline's service offerings to and from the region, it said.

Budapest has proved over the years to be an important transit hub for cargo in Europe and an increasingly important destination on Cargolux routes, said CEO-Richard Forson.

The new Zhengzhou cargo route and the frequency increase from Hong Kong will be an important extension of our cargo network, BA director for cargo, René Droese said.