PANNIER: How Putin may have leant on Turkmenistan to spike gas-for-Europe plan 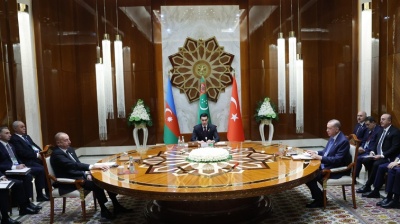 There were high hopes for a big announcement on a new supplier of natural gas to Europe when the presidents of Turkmenistan, Turkey, and Azerbaijan met in Turkmenistan’s Caspian Sea resort area in Avaza.

Prior to the December 13-14 meeting in Turkmenistan, Turkish President Recep Tayyip Erdogan commented about bringing Turkmen gas to Europe through Turkey and said, “This summit is mainly aimed at taking this step on natural gas.”

But Turkmenistan seems to have backed away from the idea.

It was not the first time Turkmenistan has failed to live up to Erdogan’s expectations and the Turkish president showed his frustration.

Erdogan pointed out at the summit that “Caspian gas to Europe,” meaning Azerbaijani gas, was already being shipped through Turkey, and said, “I hope that Turkmen gas will soon begin to flow to Turkey through the Caspian Sea.”

The project would take up to 24 months to build at a relatively low estimated cost of $500-800mn and deliver 10 to 12bn cubic metres (bcm) of gas annually.

That is only 40% of the 30 bcm of the gas envisioned as flowing in the proposed but never actioned Trans-Caspian Gas Pipeline, that has an estimated construction cost of $5bn or more, but the more modest pipeline would have political significance by opening the first export route for gas from the east Caspian (Kazakhstan also has Caspian Sea gas reserves) to Europe.

But at the end of the summit, the three presidents signed five agreements, none of which included any immediate plans for shipping Turkmen gas across the Caspian Sea to Europe.

Erdogan made some comments that indicated he was growing weary of Turkmenistan’s failure to cooperate with Ankara’s plans.

The Turkish leader said he was looking forward to Turkmenistan completing the “process of full membership” in the Organization of Turkic States (OTS).

The OTS is the latest incarnation of an organisation based on Turkic heritage and language that has existed for nearly three decades.

In the last few years, Erdogan has pushed for the Turkic group to become a political and economic bloc and in November 2021, the organisation adopted its new title.

The OTS members by now are Turkey, Azerbaijan, Kazakhstan, Kyrgyzstan and Uzbekistan, with Turkmenistan and Hungary as observer states.

Turkmenistan was supposed to become a full member at the OTS summit in Samarkand, Uzbekistan on November 11. Turkish Foreign Minister Mevlut Cavusoglu stated as much at the end of September.

There has been no mention of why Turkmenistan did not become a full member.

By itself, Erdogan’s prodding Turkmenistan at the Avaza summit to become a full OTS member might not indicate Erdogan is impatient with Turkmenistan. But Erdogan’s comments on scrapping the recently concluded visa arrangement between Turkey and Turkmenistan do suggest Erdogan is ready to retaliate if Turkmenistan continues to be unpredictable.

Hundreds of thousands of Turkmen citizens went to Turkey and apparently some have chosen to remain there rather than return to poverty and authoritarian rule back home in Turkmenistan.

A budding Turkmen opposition has emerged in Turkey in recent years, mainly comprised of young people. They have staged several public protests in Turkish cities against the Turkmen government, drawing attention to the dire political and economic situation in their homeland.

In September, the Turkmen government requested Turkish authorities impose a visa restriction on Turkmen citizens. The Turkish government consented, but three months later, with Turkmenistan proving uncooperative in joining the OTS and as regards Turkish plans to bring Turkmen gas to Europe, it seems Erdogan is prepared to be uncooperative also.

Turkmenistan is not free to act as it wishes in matters of gas exports to Europe.

On June 10, Serdar Berdimuhamedov went to Moscow for his first state visit after being elected Turkmenistan’s president. Russian President Vladimir Putin told the young Turkmen president (Serdar is 41), “Russia and Turkmenistan attach great importance to joint work with the Caspian states in the field of security, economic partnership, conservation of natural resources and maintenance of environmental well-being.”

Russia, and Iran, have opposed construction of a gas pipeline to bring Turkmen gas to Azerbaijan, for further transit to Europe via Georgia and Turkey, ever since the proposal was first made in the mid-1990s.

Publicly, Russia and Iran are against the plan because of environmental concerns, but some feel both countries are more interested in protecting their potential shares in the lucrative European gas market from a competitor (Turkmenistan’s gas reserves are the fifth biggest in the world).

Putin’s remarks on “conservation of natural resources and maintenance of environmental safety” in the Caspian Sea indicate Moscow’s position on a trans-Caspian gas pipeline has not changed.

Berdimuhamedov did not attend the November 11 OTS summit in Samarkand. Instead, his father, former President Gurbanguly Berdimuhamedov, went.

On November 1-3, Gurbanguly Berdimuhamedov was in Moscow in his capacity as chairman of the Halk Maslahaty (People’s Council). He met with his Russian counterpart Valentina Matvienko, but also with Putin, who awarded Berdimuhamedov Russia’s Order for Service to the Fatherland.

Turkmenistan’s decision the next week not to become a full member of the OTS could be more than a coincidence.

Russia has great influence over Turkmenistan and it is clear that the Turkmen government does not wish to do anything that would anger the Kremlin.

But Erdogan appears to be losing patience with Turkmenistan backing out of deals he has already portrayed as being fait accompli, and Turkmenistan’s room for political maneuvering between Moscow and Ankara seems to be narrowing.

PANNIER: Uzbeks, Kyrgyz cooperating to level unthinkable 10 years ago
6 days ago
PANNIER: A very Turkmen coup
10 days ago
OPINION: Bulgaria sets itself a tough task with Burgas-Alexandroupolis pipeline revival
13 days ago
NEMETHY: Is Ukraine War the beginning of World War III?
13 days ago
RIDDLE: The Russian army in 2023
14 days ago