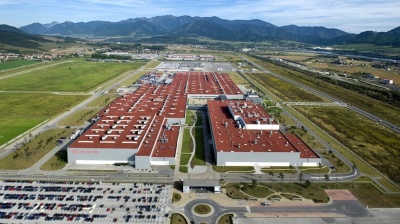 Slovakia’s economic growth is expected to decelerate in 2020 before recovering slightly in 2021, mostly due to weaker external demand that will negatively impact exports. GDP is expected to increase by 2.2% in 2020 and 2.6% in 2021, according to the Organisation for Economic Co-operation and Development (OECD), with domestic demand being relatively strong, mostly thanks to private consumption, which will be maintained by a resistant labour market with low unemployment.

The European Commission is more optimistic and expects Slovakia’s real GDP growth to reach 2.6% and 2.7% in 2020 and 2021, respectively, also influenced by significant salary growth, record-low unemployment and strong private consumption.

The inflation rate is projected to remain slightly above 2% in the coming two years, at 2.5% in 2020 and 2.2% in 2021, driven mainly by services, food prices and energy. Services price inflation is forecast to remain elevated as a result of rapid wage growth.

The unemployment rate is foreseen to decline to a record low of 5.9% in 2019 and to fluctuate around 6% in 2020 and 2021. After strengthening in 2019 due to a tight labour market and strong salary increases in the public sector, salary growth is expected to ease slightly in 2020 and 2021.

Policy uncertainty regarding trade and a further slowdown in export markets, particularly in Germany, remain the main negative risks to Slovakia’s exports and investment, which are therefore very likely to be held back. Exports are expected to grow gradually, most likely by 4.5% in 2021. Slovakia's trade balance should also gradually recover in 2020 and 2021, depending on the prospects in Slovakia’s key trading partners, and any developments affecting the automotive industry.

The eighth general parliamentary election in Slovakia since its independence in 1993 will be held on February 29, 2020.

There are hopes among the opposition that the election will bring change to Slovakia’s political environment. The opposition's goal is to replace the current senior ruling party Smer-SD, which is in a tripartite coalition with the Slovak National Party (SNS) and Most-Hid, after a decade in power.

The party has remained in power — albeit with a new prime minister, Peter Pellegrini — despite the scandal surrounding the assassination of investigative journalist Jan Kuciack and his fiancée Martina Kusnirova in 2018, which sparked mass protests and forced out former prime minister Robert Fico. Four people were charged with the murders in 2019.

The scandal was an important factor in bringing environmental campaigner Zuzana Caputova, known as the “Erin Brockovich of Slovakia”, to the presidency in 2019, but it is not clear whether the same sentiment will prevail in the upcoming general election.

According to election polls, Smer-SD is still the strongest party with up to 20% of respondents saying they would back the party, followed by the Za Ludi (For People) party led by former president Andrej Kiska, the Progressive Slovakia (PS)-Together coalition and Kotlebova-People’s Party Our Slovakia.

The election campaign will be strongly influenced by charges brought against both Kiska and Fico (Smer-SD) by the National Crime Agency (NAKA). Fico is accused of defaming a nation, race and belief, and incitement to national, racial and ethnic hatred over his support for a far-right MP’s derogatory comments about Slovakia’s Roma minority. The charges against Kiska concern a tax scandal connected to his travel agency KTAG.

Bratislava aims to put finances on a sustainable footing

According to the finance ministry, the main priority for 2020 is to recover public finances in order to achieve long-term sustainability. The ministry has prepared an amendment adjusting both the revenue and expenditure sides of the budget, which has already been approved by the parliament. The current draft budget expects a deficit of 0.49% of GDP in 2020.

The state budget revenues were reduced due to the omission of a levy on the profits of state-run forestry company Lesy SR at €5mn and an increase in expenditures of the labour ministry by €80.5mn due to the growth in minimum pensions.

The European Commission accepted Slovakia’s state budget draft for 2020, however, it did not fully comply with EU requirements. This was due to the economic slowdown, the deteriorating external environment and several pieces of pre-election legislation.

The Commission identified certain risks of deviation for eight eurozone countries, including Slovakia, when assessing the structural balance as well as the expenditure rule. Slovakia’s general government deficit is expected to rise to 1.2% of GDP in 2020 due to the introduction of government fiscal measures reducing the tax burden and the introduction of minimum pensions.

According to the European Commission, the general government debt-to-GDP ratio will “remain on a declining path, thanks to the pace of nominal economic growth”. The ratio is projected to decline to 48.1% this year, 47.3% in 2020, and 46.9% in 2021.

Slovakia's government bond yields turned negative in 2019, with a decline in yields on both mid-term and short-term debt, pointed out Erste Group Research.

Banks stable and profitable but face new risks in 2020

According to the National Bank of Slovakia, Slovakia's stable and profitable banking sector, positively influenced by net interest income growth in 2019, is likely to be threatened by low interest rates, growth in indebtedness of Slovak households, and the planned extension and increase in the bank levy in 2020.

Due to the introduction of the bank levy, the central bank warned there is a threat of capital outflow that would affect financing the economy. Also, the Council for Budgetary Responsibility warned that the state debt could thus increase to 48.2% of GDP in 2019 and 2020.

The special bank levy was introduced by Finance Minister Ladislav Kamenicky in 2019, despite the warnings by the European Central Bank, and is due to should increase from 0.2% to 0.4% of the value of banks' liabilities in 2020, then drop back to 0.2% in 2021. Banks are expected to pay an additional €144mn in 2020.