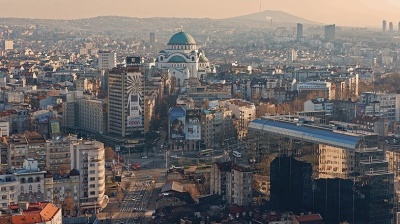 Serbia is due to hold a general election at the end of March 2020 — the first regular general election in the country after three consecutive early votes, with the last one being held in 2016. Although President Aleksandar Vucic’s ruling Serbian Progressive Party (SNS) has been the largest party in the Serbian parliament for years, he has repeatedly resorted to snap elections to strengthen his position.

Currently, the SNS-led coalition has 131 seats in parliament, while another 34 MPs also support the government of Prime Minister Ana Brnabic.

The general election comes after months of protests against Vucic’s regime. At their peak, the protests gathered thousands of people. Despite that, for the moment the opposition does not seem to have a chance of winning the election. According to a poll released by local media in December, the SNS would gain 52% of the votes, way ahead of any opposition party. However, only 45% of Serbians would vote.

Vucic said in December that he will give up the leadership of the SNS as part of the planned overhaul of the party after the general election, as Bloomberg reported. “It’s my decision not to run” for the top party job, he said as quoted by Bloomberg, calling for a younger generation of activists. However, Vucic has not elaborated on who would succeed him.

Since Vucic came to power, initially as prime minister and more recently as president, the country’s top priority has been EU accession. However, Vucic has balanced this with maintaining warm relations with Russia. Serbia is also the main recipient of Chinese investment in the Western Balkans.

As it moves closer to EU accession, Serbia will have to deal with its issues with Kosovo, which unilaterally declared independence from Serbia in 2008. Normalisation of its relations with Pristina is a condition for Serbia to join the EU, but relations between the two deteriorated after Pristina imposed 100% tariffs on imports from Serbia and Bosnia & Herzegovina in 2018. Vucic claims to be ready to make compromises so that the two countries find a suitable solution, but it will be extremely difficult to reach a settlement that is acceptable to both sides.

Serbia’s economy is expected to continue posting robust growth in 2020 with the pace seen accelerating compared to 2019, mainly thanks to the government’s investments in infrastructure, wage and pension hikes and strong domestic demand.

The government increased public sector wages on November 1 and provided a one-off payment to pensioners. It plans to again increase public sector wages as well as pensions as of January 1, 2020. The International Monetary Fund (IMF) has noted that these measures do not jeopardise fiscal sustainability. These hikes should further boost domestic demand, which is one of the main drivers for economic growth.

The government has ambitious plans to boost economic growth over the next five years. The government will invest €14bn in projects aiming to stimulate economic growth by 2025, according to the ‘Serbia 2025’ investment programme presented at the end of December by Vucic and Prime Minister Ana Brnabic. “We shall make our country a better place for living,” Brnabic said during the presentation of the plan.

The plan was developed with the help of the World Bank and envisages investment of €9bn in infrastructure such as road and rail.

The new five-year cycle would put as top priorities regional integration, development of the financial market, reforms in education, strengthening of the public companies and sustainable economic growth, Brnabic said.

The investments will be funded from the state budget and with loans from international financial institutions.

Once the ‘Serbia 2025’ programme is implemented, the average salary in the country should reach €900, while the average pension will be between €430 and €440, Vucic said at the programme’s presentation.

Of the total, Serbia will invest €100mn in science and education, while further €90mn will go for the development of artificial intelligence technologies, as the country wishes to become one of the European leaders in the segment.

Serbia also plans to spend €200mn to increase the financial support to families after a child's birth, as well as for public day care services, reproduction health and care for children with autism, Vucic said.

In December, the World Bank said that Serbia needs to implement a new, ambitious growth agenda in order to get closer to the levels of prosperity in the EU after making significant progress after the ex-Yugoslav wars in the 1990s to curb hyperinflation and restore broken infrastructure.

The independent state fiscal council has said that Serbia's budget for 2020 is relatively well planned but that the already implemented increase in public sector wages poses fiscal risks. It says the biggest economic mistake of the government in drawing up the budget was the decision to increase public sector wages by 9.6%, which predetermined a large share of the expenditure in the budget for 2020.

On the other hand, the council noted that the remaining budget funds have been mainly well distributed, assessing the budget draft relatively positively.

The government has also assessed that issuing dinar- and euro-denominated securities is the best option in terms of lowered risk to its public debt goal.

In 2019, Serbia successfully placed a ten-year Eurobond issue, raising €1.5bn, and decided to issue US dollar-denominated long-term bonds on international markets in order to replace debt maturing in 2020.

The government has also decided to buy back early long-term US dollar-denominated securities issued on international markets.

Komercijalna Banka up for sale

The government is expected to complete the privatisation of the country’s second-largest bank, Komercijalna Banka, in 2020.

However, in November, the government extended the deadline for submission of binding offers in order to attract more quality offers until December 16.

Meanwhile, the government has gradually been buying up the stakes of other shareholders in the bank and now owns 82.23% of the ordinary shares of Komercijalna Banka.