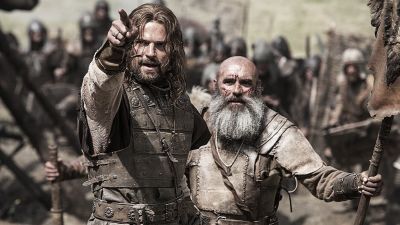 The fight is on for Russia's cinema market: A still from 2016 Russian hit movie 'Viking'. / Photo by Film Direction
By Vadim Dumesh in Paris March 31, 2017

The deal is the latest example of Russia’s billionaire oligarchs buying into the national cinema industry as homemade patriotic movies challenge Hollywood blockbusters in popularity, and with the number of domestically produced feature films soaring.

Reportedly A&NN Investments Ltd controlled by Mamut acquired Cinema Park that operates 39 multiplex cinemas across Russia's regions with around a 7.5% share of the theatrical exhibition market.

Moreover, Mamut is reportedly considering acquiring another cinema chain Cinema Formula (Formula Kino) that operates another 35 multiplexes with 5.9% market share. While Cinema Park has a more developed chain in the regions, Cinema Formula has strong presence in Moscow and St Petersburg.

The Cinema Park chain was acquired by Kerimovs in 2014 from Russian oligarch Vladimir Potanin for an estimated $400-500mn. Reportedly, Mamut was impressed by recent box office revenues of large-scale Russian productions, such as “Viking” that grossed RUB1.5bn ($26.7mn) in its first 12 weeks. With a budget of $20.8mn “Viking” was the third most expensive Russian film (after two parts of “Burnt by the Sun”) by the time of its release on December 22, 2016.

It is no surprise that major Kremlin-affiliated industrial billionaires such as Potanin, Kerimov and Mamut are also investing in cinema exhibition, as the box office and cultural impact of domestic “patriotic” blockbusters grows.

On March 28, Vedomosti daily reported that both Cinema Park and Cinema Formula, along with two other major cinema chains Karo and Kinomaks, urged the Ministry of Culture not to postpone the opening of the latest installment of the Hollywood franchise “Fast & Furious 8”.

Reportedly, the premiere was pushed back a week to vacate the spot for Russian historic saga “Time of the First”, dedicated to the space travel of Soviet cosmonaut Alexei Leonov, which was lobbied by the picture’s producer Timur Bekmambetov of the Bazelevs productions house. (Bekmambetov also worked in the US with such names as Angelina Jolie after the success of Russia’s first acclaimed Hollywood-style modern movie, the fantasy thriller “Night Watch” released in 2004.)

According to an industry source of Vedomosti, a conflict is brewing between the representatives of various production houses, cinema chains, the Ministry of Culture, which controls the federal premiere schedule, and the state Cinema Fund supporter of major productions.

Mostly due to support of the Cinema Fund, the number of feature films produced in Russia grew by 50% in the past five years from 89 to 134 feature films in distribution, according to a September 16 report by the European Audiovisual Observatory.

Meanwhile, parallel to the traditional theatrical release of movies, the online distribution market is also booming, with Russia’s internet audience last year for the first time beating the ratings of state-controlled federal channels.

Online-cinema Amidiateka in 2016 boosted revenues by 112% to RUB600mn, dominating the market and pocketing a profit of RUB400mn. Total revenues of Amedia (TV cable and online platform) in 2016 increased by 40% to RUB1.3bn.

The company produces and acquires its content and also has an exclusive deal with HBO for distribution in Russia, launching the online platform in 2013.

Russian internet major Yandex is also about to enter this lucrative market. The company said on March 13 that it has started to test broadcast content of Russian TV channels and production houses on its internet platforms.

Yandex reportedly closed deals with First Channel, NTV, and REN TV broadcasters, the Bazelevs, Amedia, Sreda production houses, and the Mosfilm and Lenfilm studios. Under the agreements, Yandex will provide its infrastructure for placement and monetisation of content.

“Together with a limited number of partners we are currently experimenting with online TV,” Yandex director of video projects Natalia Grishkina said, adding that various formats of advertising are being tested.