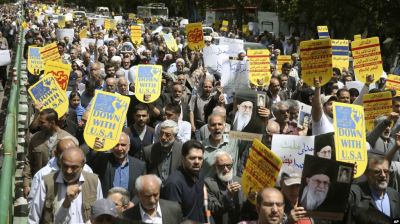 Worshippers chant slogans against the US and Israel during a rally after Friday prayers in Tehran on May 10.
By bne IntelliNews May 23, 2019

Officials from several countries “mostly representing the United States” have visited Iran lately, the spokesman for the Islamic Republic’s Supreme National Security Council was quoted as saying by Iranian state television on May 23 amid the standoff between Tehran and Washington.

Keyvan Khosravi did not elaborate, but the foreign minister of Oman, a country which in the past has helped open the way for negotiations between Iran and the US, visited Tehran on May 20.

“Without exception, the message of the power and resistance of the Iranian nation was conveyed to them [the visiting officials],” Khosravi said.

Citing the “economic war” the US is waging against Iran in its bid to reshape Tehran’s approach to the Middle East, the Iranian leadership has ruled out negotiating with the Trump administration, choosing instead to emphasise that the path of “resistance” is the way forward. Reiterating that stance, the National Security Council spokesman said: “There will not be any negotiations between Iran and America.”

Tensions have spiked between Tehran and Washington in the past month because of a number of US moves including sending more military forces to the Middle East, designating Iran’s Islamic Revolutionary Guard Corps (IRGC) as a foreign terrorist organisation and launching a drive to push Iran’s lifeline oil exports to zero.

Also on May 23, US media were reporting that Pentagon officials were scheduled to brief senior members of Donald Trump’s national security team on a plan that could send 5,000 extra troops to the Middle East.

IRGC rhetoric this week has included senior officers saying US forces would be "obliterated" if Washington attempted any "adventurism".

US 'would need million soldiers'
Analysis of the situation in recent days has included Admiral Lord West, the former First Sea Lord of the British Royal Navy, assessing that US forces would need at least one million soldiers to defeat and occupy Iran, a country of 81mn people, in what could be another Iraq War-style quagmire. The 50-year navy veteran also warned “idiots” in both the US and Iran were dangerously hyping tensions.

Iran’s Fars news agency, meanwhile, on May 23 reported that Tehran told a German envoy seeking to preserve the 2015 nuclear deal that its patience was over and pressed the treaty’s remaining signatories to meet the commitments that they said they would stick to even after the US unilaterally pulled out of the accord in May last year.

The UK, France and Germany, which signed the 2015 deal along with the US, China and Russia, have repeatedly said they would respond to the US exit from the deal by protecting trade. But the commitment has amounted to very little practically speaking, and, demonstrating its patience is finite, Iran has made it clear that it is edging towards a strategy that within the not too distant future could see it decide to abandon the deal.

“At the centre of the political director’s visit is the preservation of the Vienna nuclear accord [formally the Joint Comprehensive Plan of Action, or JCPOA],” a German diplomatic source told Reuters.

“After Iran’s announcement to partly suspend its commitments under the JCPOA, there is a window of opportunity for diplomacy to persuade Iran to continue to fully comply with the JCPOA.”

The JCPOA was drawn up to shield Iran from heavy sanctions in return for compliance with measures configured to stop Tehran from moving towards the development of a nuclear weapon. The remaining JCPOA signatories and UN atomic watchdog inspectors say Iran has never breached the deal. Trump says the accord is too soft as it does not address matters such as Iran’s ballistic missile programme, support for “malign” militias in conflict zones of the Middle East and ability to initiate a programme to construct a nuclear bomb once the JCPOA expires. The other signatories say these issues should be addressed separately.