Suleyman Demirel, who served seven times as Turkey’s prime minister and as the country’s ninth president from 1993-2000 in a political carrier spanning nearly 50 years, has died, aged 91, in Ankara, where he had been treated for a respiratory tract infection.

Demirel was the country’s dominant political figure throughout the 1960s to the late 1970s, during one of Turkey’s most turbulent times that finally led to a military coup in September 1980. Demirel also had survived a military coup in 1971. He and his Justice Party, or AP, was banned from Turkish politics after the 1980 coup. He later led the True Path Party, or DYP, from 1987 to 1993.

From poor village to Presidential Palace

Demirel, who was born in 1924 in a village in the south-western province of Isparta to a poor farming family, studied civil engineering at the Istanbul Technical University, one of the country’s most prestigious schools. After graduation, he started to work for the state department for electrical power planning in 1949. He went to the United States for further engineering studies. Demirel became the head of the State Hydraulic Works (DSI), supervising the building of dams, power plants and irrigation facilities during the 1950s that later earned him the title “the king of dams”.

Demirel, a conservative, entered Turkish politics in 1962. He became the leader of the AP in 1964 and led the rightist party until the 1980 coup. Because of his rural background, Demirel was known as “the Sulo the Shepherd”. Back in the 1960s, Turkey was still largely an agrarian society and his village background appealed to the electorates in the conservative heartland of Anatolia. Demirel, also a skilful orator, first came to power in 1965 when his AP won a landslide victory in the 1965 elections, garnering 52.9% of the votes.

Turkey’s leftists always despised Demirel because of his good ties with the US and his staunchly anti-socialist views, deriding him as “Morrison Demirel” – an allusion to his job as representative in Turkey for an American contractor called Morrison Knudsen. In the eyes of the leftists, “Morrison Demirel” was in the service of American imperialism.

Despite facing two military coups, Demirel never challenged the mighty military. He did complain about the military interventions but never tried openly to reduce the military’s influence over Turkish politics. He was a true pragmatist. He once famously said, “yesterday was yesterday, today is today”, when challenged over how he so easily adapted to the changes in political climate and changed his positions.

Demirel forged alliances with far-rightists and Islamists back in the 1970s. His ban from politics was lifted in 1987 and he served as PM in a coalition government with Social Democrats from 1991 to 1993.

When Turgut Ozal, then president, died of a heart attack in 1993, Demirel succeeded him, becoming Turkey’s ninth president.

Demirel followed in the footsteps of the late Ozal and developed ties with the Turkic republics of the former Soviet Union during his presidency.

The last years of his political career coincided with the bloody clashes between the military and the Kurdish separatist PKK. Unlike today’s more pragmatic policy of President Recep Tayyip Erdogan, Demirel refused to negotiate over the Kurds’ rights. He believed military tactics could solve the “Kurdish problem,” using all means necessary to oppress Kurdish demands, including torture, evacuation of villages, even assassinations and summary executions of suspected militants.

Demirel, who himself were overthrown twice by the country’s generals, remained silent when an Islamist-led government collapsed under the pressure from the secularist military in 1997, in an event later dubbed as Turkey’s “post-modern coup”. The military did not directly seize power, but forced the Islamist PM Necmettin Erbakan, who was in a coalition government with Demirel’s former party DYP, out of office.

Demirel was seen by many as Turkey’s “wise man”, and one of great political survivors, equipped with necessary skills to navigate through troubled waters at very difficult times.

President Erdogan, who unlike Demirel is chafing against the restrictive purely ceremonial role of the presidency, and PM Ahmet Davutoglu praised Demirel’s services to his country.

Erdogan’s AKP came to power in 2002, two years after Demirel’s term ended. They never worked together.

Demirel served as president when Turkey was plagued by unstable coalition governments; today Erdogan, whose ambitious plans to transform Turkey in a powerful presidential system were dealt a significant blow in the June 7 elections, also now faces serious political challenges. The AKP, the party Erdogan founded, lost its majority in parliament and it is now struggling to form a coalition government with the opposition parties that are deeply hostile to Erdogan.

The question remains whether Erdogan, also a pragmatic politician, will retreat and accept to play a ceremonial role so as not to further polarize the society, just like Demirel when he was thrown from power by the military but remained silent in the name of the nation’s higher interests.

Demirel, who left a deep mark on Turkish political history and contributed to the development process of our country, is among the most prominent figures of our political history as a politician and a statesman, said Erdogan in a written statement.

The government announced three days of national morning for Demirel. A state funeral for the former president will be held on June 19 in Ankara. 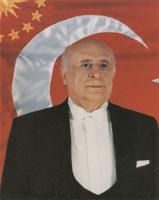