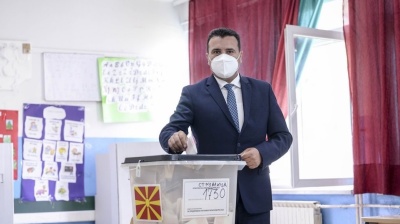 The coalition led by North Macedonia’s ruling Social Democrats (SDSM) is narrowly leading in the July 15 snap general election ahead of the conservative opposition VMRO-DPMNE, initial results from the state election commission (SEC) showed in the early hours of July 16.

These were the first elections since the country previously known as Macedonia changed its name by adding “North” to his name, after it reached the name deal with Greece in 2018, which was criticised at home, but solved the long-standing name dispute that opened the way for the country to become a Nato member and get the green light to start the long-awaited EU accession negotiations.

After nearly 94% of the votes were counted, the SDSM in coalition with ethnic Albanian party Besa won 36.13% of the votes compared to 34.65% for the coalition led by VMRO-DPMNE, the SEC announced.

The elections were seen as a referendum on the ruling party’s progress towards EU accession. The SDSM also brought the country into Nato earlier this year.

Among the smaller ethnic Macedonian parties, only Levica (the Left) gained a chance to enter the parliament after 3.93% voted for the party. Other parties were around or below 1%.

At 2am SDSM leader and ex-PM Zoran Zaev declared an election victory saying that the party will gain at least three more seats in the 120-seat parliament than VMRO-DPMNE.

However, according to the SEC projection, the distribution of the seats according to the counted votes will be as follows – SDSM (45), VMRO-DPMNE (44), DUI (16), the Alliance for Albanians and the Alternative (12), Levica (2) and DPA (1). The SEC said that the complete results will be announced on July 16.

“The will of the people was confirmed. The people voted for security and the future,” Zaev, who is the ruling party’s candidate for PM, said euphorically in front of party members and journalists.

Zaev promised that the new government will work for the interests of all citizens, for economic progress and to bring justice in the country.

Experts said that the SDSM's narrow lead will make the process of forming a new cabinet difficult. Prior to the election, the SDSM said that it won’t form a new government with its former partner the DUI, but looking at the election results it will need the DUI to enter the new cabinet.

The elections were peaceful, fair and democratic. However, the website of the state election commission was down during the counting of the votes, which made monitoring the results difficult. According to the president of the SEC Oliver Derkoski this was the result of an external cyber attack.

The election turnout was 50.86% compared to 66.79% in the previous election in 2016. Even though this was the lowest turnout since the independence of the country in 1991, it was much higher than expected given that it took place during the coronavirus (COVID-19) pandemic and was held in mid-summer.

Elections were initially scheduled for April 12, but were postponed due to the outbreak of coronavirus.

Zaev resigned in early January, disappointed with the EU’s failure to give the country the green light for accession talks in October 2019, but the EU went on to make a positive decision in March, after the adoption of the new negotiation methodology. Since January, North Macedonia has been led by an interim government under Oliver Spasovski, which includes a minister and deputy ministers from VMRO-DPMNE.

In the July 15 elections, voters were eligible to choose among 15 coalitions and parties with 1,578 candidates. The voting process lasted three days, as July 13-14 was for sick people and those infected with coronavirus or in self-isolation to vote.

The elections were conducted under a special health protocol for protection from coronavirus and lasted two hours longer than usual, from 7am to 9pm.