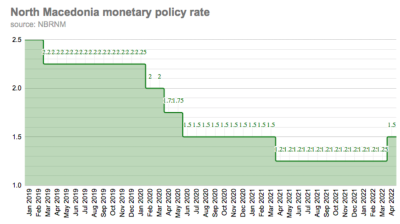 North Macedonia’s central bank increased its key rate by 0.25 of a percentage point (pp) to 1.5%, as a preventive measure due to the rising inflation, it said on April 13.

The key rate, which is also the rate for central bank (CB) bills, was unchanged since March 10, 2021, when it was cut by 0.25 pp to 1.25%. The increase of the basic interest rate is expected to slightly raise the interest rates of loans.

“The decision was based on the latest developments regarding price hikes and inflation expectations in conditions of unchanged estimates for the absence of more pronounced pressure from the domestic demand and downside risks to it in the next period,” the central bank said in the statement.

In terms of inflation, the latest data showed that consumer prices growth accelerated to 8.8% y/y in March.

“The main factors of inflation came from the higher prices of energy and food products, due to the increasing import prices. They account for more than three quarters of the inflation growth,” the central bank said in the statement.

However, given that these products are input components of many other products and services, and due to the disruptions in production chains, prices of other imported products also increased.

“The military conflict in Ukraine emphasizes the downside risks to domestic demand in the coming period,” the national bank said.

Regarding the GDP growth, available high frequency data for the first two months of 2022 are sending mixed signals, with improved performance in industry, further reduction of construction activity and moderate annual growth of the trade turnover.

“The military escalation between Russia and Ukraine since the end of February has adverse effects on the global economy, further worsens the disrupted global supply chains and energy market, as well as the confidence of business entities and also negatively affects the outlook for the domestic economy,” the central bank said.

The next auction of CB bills is due to be held on May 11.

Poland’s inflation unrestrained in September at 17.2%, flash estimate shows
2 hours ago
Russia’s industrial output decline slows to only 0.1% in August
3 days ago
Poll shows Putin's popularity took hit in September but remained as high as 77%
3 days ago
Russia on track to have a record-smashing grain harvest
5 days ago
Bosnia posts annual CPI inflation of 16.8% y/y in August
5 days ago