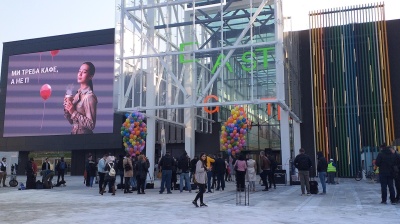 By Valentina Dimitrievska in Skopje November 1, 2021

East Gate Mall, the biggest mall in North Macedonia officially opened its doors to customers in the capital Skopje on October 29.

The mall will serve customers from North Macedonia, where the retail sector has bounced back from the coronacrisis, but its developers also hope good transport links will bring in shoppers from other countries in the Western Balkans.

As incomes increase in North Macedonia and elsewhere in the EU-aspiring region, it has become more attractive for international brands — among those at East Gate Mall are the portfolios of international fashion retail groups Inditex Group and LLP — and there is strong demand for modern retail space. Of the 600 brands on sale at its 220 stores, 40 are offered for the first time in the country.

The stores include the largest Zara in the Balkans offering both Zara and Zara Home, as well as the other brands in Inditex Group’s portfolio, Оysho, Massimo Dutti, Bershka, Pull and Bear and Stradivarius.

Meanwhile, LPP, one of the fastest-growing fashion chains in Eastern and Central Europe, has entered North Macedonia for the first time, with its five brands, Reserved, Mohito, House, Cropp, and Sinsay.

“We are happy to be opening the first stores in North Macedonia, which is the seventh country on the Balkan market in which we offer our fashion. The style and variety of our collections are well received by customers in this part of Europe,” Olga Josevska, regional LPP manager for North Macedonia, Albania and Kosovo, said earlier, according to statement published by East Gate Mall company.

Biggest in the country

Developed by Albania’s Balfin Group, the mall, which cost more than €103mn to build, covers a space of over 160,000 sqm and has leasable area of about 57,000 sqm across five levels and 2,000 parking spaces. Shoppers would need 18 hours to explore each walkway and store in the mall.

According to the developer’s projection, about 12mn visitors from the country and the region are expected to visit the mall annually.

It is located just five minutes’ walk from downtown Skopje, but is also near the bypass around the capital, a component of the M4 motorway that linked the capital with the western part of the country and is part of the pan-European Corridor VIII.

Until now, the most popular shopping centre in Skopje has been City Mall on the other side of the city which attracts a lot of people for shopping and entertainment. However, East Gate Mall is expected to satisfy the needs of the people, who live in the other part of the city.

“My parents live in the neighbourhood while I am on the other side of Skopje, so the new mall will be a reason for me to visit them more often,” one of the visitors said in an informal conversation with bne IntelliNews. 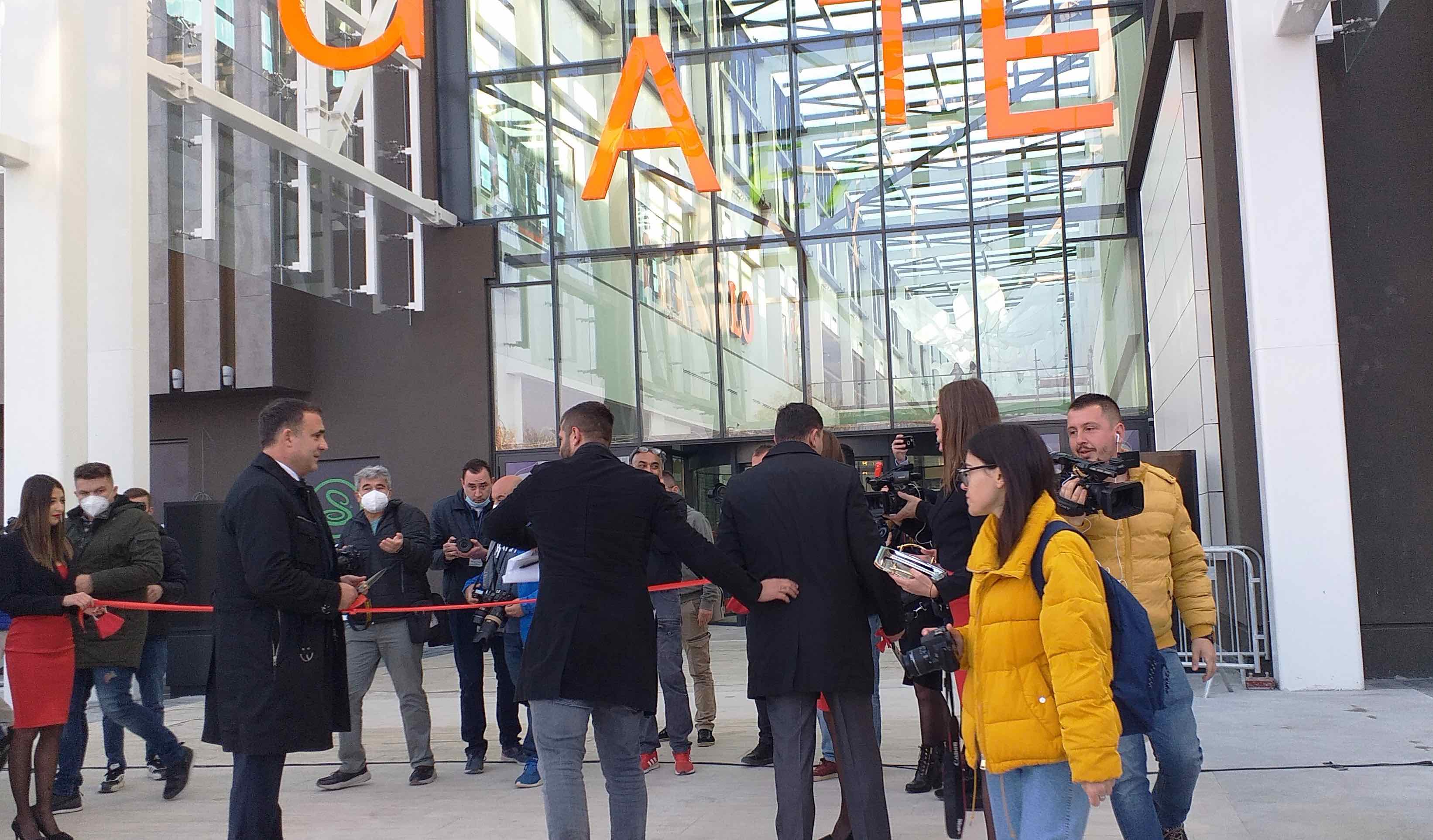 Shoppers flocked to the mall during the opening day, which was marked with fanfare and special events, including music performances and discounts.

As the mall prepared to open, shop workers were making the final preparations to welcome the first visitors after 10 o'clock. Some were wiping down the food stalls, others were putting clothes on shelves.

Not all stores were ready for opening the first day, while some workers were still finishing the rest of the indoor works such as installing the lifts.

The construction of the mall was completed within a period of slightly over two years under the very challenging conditions of the global COVID-19 pandemic.

North Macedonia’s Prime Minister Zoran Zaev, who attended the official opening, said that what is important for the local economy is that over 2,500 people will work in the new mall.

“90% of the companies that were contracted to build the mall were local ones and they completed the construction of the mall in record time, working dedicatedly,” Zaev said.

“We are proud to welcome you at the opening of the largest commercial building in the history of this country and one of the best shopping malls in the Balkans,” East Gate Mall’s general manager Sotiris Giannakoudakis said at the ceremony, which marked the opening of the mall for customers.

“East Gate Mall is not a classic shopping mall, but something much more. It represents a new heart of Skopje, offering an original mix of entertainment concepts for all generations,” Giannakoudakis added.

The mall is the first part of the three-stage East Gate project. The whole project will include residential and business complexes, which are expected to be finished in the later stages. The total investments in the East Gate project in Skopje will amount to €350mn.

East Gate Mall is an investment by Albania-based Balfin Group, whose portfolio covers many sectors such as real estate, tourism, energy and banking. Aside from the Albanian market and now in North Macedonia, Balfin Group is also present in the markets of Austria, Bosnia & Herzegovina, Kosovo, Montenegro and the Netherlands. 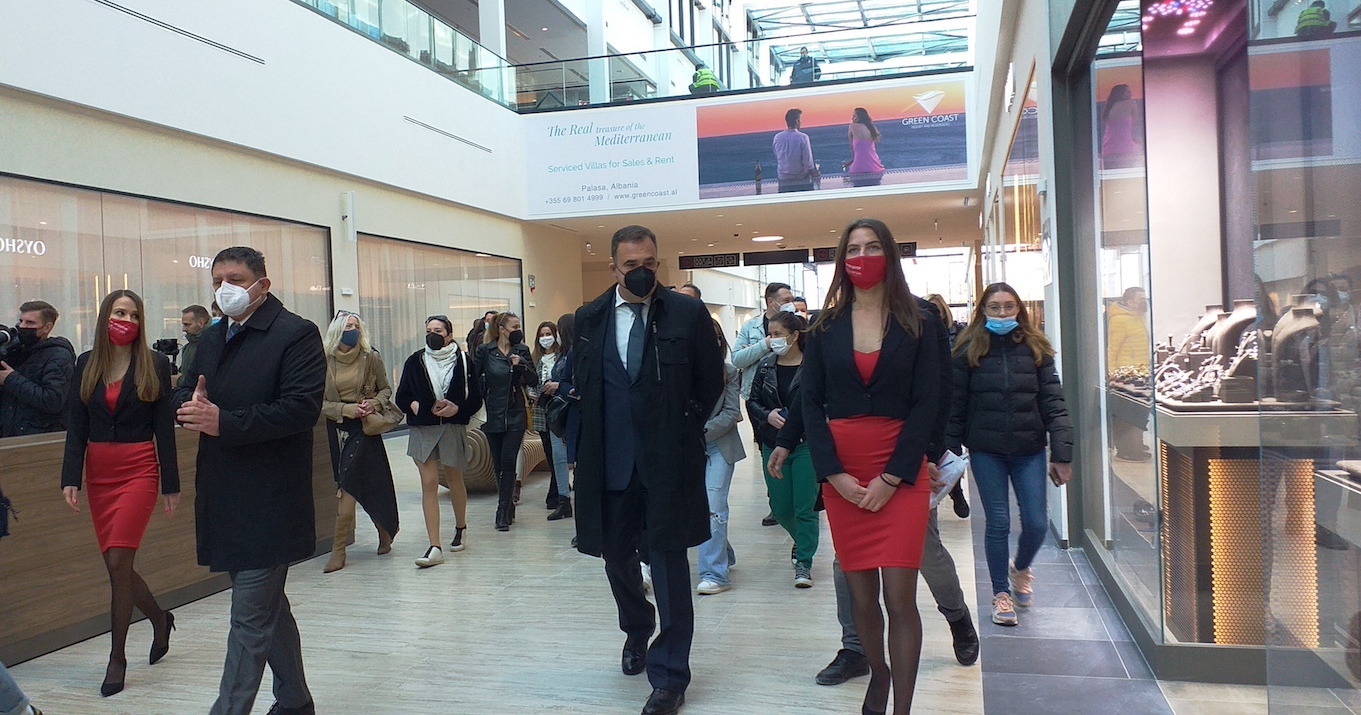 “Despite short-term pandemic closures, the retail market in North Macedonia has proven to be resilient. Customers are returning to their shopping habits and net sales are reaching pre-pandemic levels.

“On the occupiers’ side, despite the increase in e-commerce and food delivery, shopping in stores remains steady, supporting the value of brick-and-mortar retail. Key domestic and foreign retail chains have great interest for expansion, and a high-speed rebound is foreseen,” said Cushman & Wakefield|FORTONMKA in a statement emailed to bne IntelliNews.

The three mixed-use projects in Skopje, Skopje East Gate, Cevahir Sky City and Diamond of Skopje, will deliver 120,000 sqm of retail gross leasable area (GLA) by the end of 2022. The most active occupants remain in the fast-moving consumer goods (FMCG) segment and fashion brands, according to Cushman & Wakefield|FORTONMKA.

Vacancy rates remained stable below 15%, mainly from the retail gallery segment and the high streets. The existing shopping centres in Skopje have near 0% vacancy, while the prime rents remained stable at €39/sq m in H1 2021.

Rents in the retail parks are stable at €5-6/sq m in Skopje and €4-5/sq m in secondary cities. The prime shopping mall yields remained stable, ranging from 9% to 9.25%.

“The retail market in North Macedonia will reach a certain peak in development with the opening of East Gate Mall on October 29 this year. More than 250 major global and regional brands have already pre-identified East Gate Mall as a regional shopping and entertainment destination,” according to Cushman & Wakefield|FORTONMKA.

The real estate consultancy said it worked on creating a world class tenant mix representing all new tends in the shopping centre industry. Out of the 57,000 sqm GLA, 40% is dedicated to newcomers.

“We expect in the foreseen future investor focus in North Macedonia to be tenant driven, with emphasis on retail parks as a cost-effective opportunity not only in Skopje, but in the secondary cities as well.