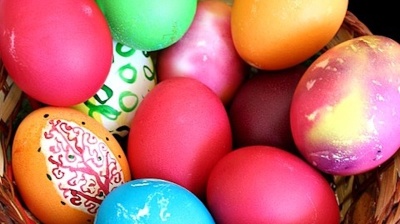 The ritual of egg tapping — where participants try to crack their opponent’s egg shell while keeping their own egg intact — will take place only among immediate family members this year. / Ikonact
By Valentina Dimitrievska in Skopje April 12, 2020

Orthodox Easter is coming, but there is none of the usual joy and anticipation among Macedonians as they wait for the biggest Christian holiday of the year. Instead they are occupied with how to survive within four walls due to restrictive measures against the coronavirus (COVID-19) epidemic.

People in North Macedonia lined up in long queues outside markets on April 10 to stock up on supplies for the weekend after the government imposed a prolonged 61-hour curfew from 4pm on Friday to 5am on Monday.

The measure was taken to prevent the spread of coronavirus. As of April 12 the number of people infected in the Balkan country of 2mn reached 828 after increasing by 68 in the previous 24 hours, the second biggest increase so far.

Interim Interior Minister Nake Chulev said such strict measures were needed because people in the country are very sociable.

“We have very intensive social contacts, people find it difficult to give up the normal way of life, so the government's measures are in that direction,” Chulev said.

Such measures are unprecedented in recent history. Some residents of North Macedonia readily accept the measures, but there are some who think they are too rigid and will not bring results, but on the contrary will be counter effective.

“The government bans movement in groups larger than two, but at the same time the markets are crowded in the morning with the elderly, who want to stock up on food and other necessary products,” said Dino, a 26-year-old economics student from Skopje, who also works as commercialist in one of the largest dairies.

“Many of them do not wear masks so we are directly exposed. There are also many people waiting in queues in front of banks, post offices, pharmacies. This curfew can only have the opposite effect [from what is intended],” Dino told bne IntelliNews.

Law professor Gordan Kalajdziev said in a TV show on Telma broadcaster that that the measures are too strict.

"After this initial shock, I wonder whether the government's restrictions on movement are really necessary and proportionate to the threats. We do not have mechanisms to guarantee that the government will not abuse its powers, especially if the situation continues," Kalajdziev said.

The economy is suffering huge losses due to the strict measures that have led to the closure of cafes, restaurants, hotels and casinos.

Representatives of the catering sector said last week they would not accept government measures worth €200mn for subsidising wages, provided they do not lay off workers. Martin Angeloski from the Chamber of Tourism and Catering said that the initial set of government measures was inappropriate, incomplete and incomprehensible and called for concrete measures to cover the sector’s losses.

The government immediately reacted and after meeting representatives of the chamber said that the shortcomings will be overcome and new measures will be adopted soon.

“The government saw the flaws, corrected them and made changes to the decrees. We talked about new measures but also about preparing the sector to start operations gradually,” Finance Minister Nina Angelovska said.

Angeloski said that since the beginning of the crisis, the sector, which employs around 29,000 people, has been forced to lay off as many as 15,000 people, which is about 60% of the total.

Some caterers have come up with creative solutions to alleviate the effects of the coronavirus crisis, such as offering home delivery services.

Rustikana restaurant is selling discounted vouchers via its Facebook page.

“While we are closed, we are selling gift cards or vouchers that can be purchased now and be used when we will start working. The vouchers are worth MKD500 [€8.1] and MKD1,000, but the selling price is MKD400 and MKD800,” officials from the restaurant said.

“This way, you would help us to overcome the crisis, and we would show our gratitude to you by reducing your bills by 20%.”

The crisis has not bypassed religious institutions either. Churches and mosques in North Macedonia, where around 70% of population are Orthodox Christians and about 29% are Muslims, have also been empty due to the government's measures.

In particular, a statement from the head of the Islamic Religious Community (IRC), Sulejman Rexhepi, attracted media and public attention. Rexhepi threatened on April 8 that if the government does not meet its requests for financial assistance, the IRC would urge citizens and believers to return to mosques and disregard the restrictive measures.

Rexhepi said that the IRC has sent a message to Deputy Prime Minister Bujar Osmani as coordinator of the crisis headquarters, asking for the IRC to receive its share of the aid extended by the authorities, but so far they have not received any response.

"We will issue another request and if they do not respond, we know how to act. God forbid if we withdraw our calls [for not visiting mosques] due to the pandemic. The situation will spiral out of control and we can become like Bangladesh," Rexhepi told the Lime Press.

Immediately afterwards, the government awarded €120,000 to the Orthodox Theological Faculty (€73,000) and the Faculty of Islamic Sciences (€49,000), both in Skopje, but denies that it was a result of Rexhepi's threat.

“The funds determined by this decision are exclusively for the smooth implementation of the study programs of these institutions in 2020,” the government said in a statement on April 10.

Orthodox bishop Timotej said that half of the revenues of the churches and monasteries in North Macedonia are generated from the Easter holidays and complained that the church is seriously affected by the crisis.

While the Western world has already celebrated Easter, Orthodox Christians, including those from North Macedonia, will celebrate the holiday starting from April 17, but isolated at home.

Churches will remain closed to avoid mass gatherings and the authorities are believed to be preparing stricter restrictions for next weekend, ie a curfew from 4 pm on Friday April 17 to 5am on Tuesday April 21.

Easter is the favourite holiday of the Macedonians. Large numbers of people celebrate by going to churches and staying until midnight waiting for the symbolic resurrection of Jesus, painting eggs in different colours and preparing full tables of food that include lamb dishes after a 40-day fast, which is practiced by some.

Colours for eggs, egg baskets with straw and other Easter decorations are in the stores, but this is not a priority for anyone now. The ritual of egg tapping — where participants try to crack their opponent’s egg shell while keeping their own egg intact — will take place only among immediate family members this year.

Meanwhile, everyone is waiting to see the light at the end of the tunnel soon as promised by Health Minister Venko Filipce. Filipce announced that at the end of April or beginning of May the measures will be gradually reduced and the cafes and restaurants, favourite destinations of Macedonians in the spring, will reopen.

However, everything will depend on how the curve of infection moves. So far, according to Filipce, the curve is linear rather than exponential. Nevertheless, many believe that no economy can long withstand the measures imposed to contain the spread of the virus.