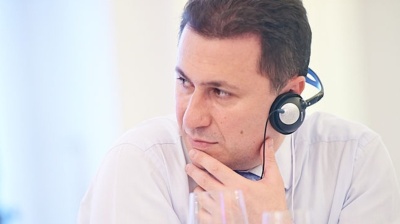 Former prime minister Nikola Gruevski, who headed VMRO-DPMNE at the time the land was acquired, has been sentenced to six years in prison for abusing his position to build the party’s headquarters.
By Valentina Dimitrievska in Skopje June 9, 2022

The Criminal Court in Skopje has decided to confiscate the headquarters of the North Macedonia’s biggest opposition party VMRO-DPMNE and its 30 district offices due to allegations of illegal construction.

Prosecutors managed to prove that the land where the headquarters stands, which was purchased between 2009 and 2015, was acquired illegally by VMRO-DPMNE.

VMRO-DPMNE's headquarters in Skopje’s downtown, called the White Palace, is worth €7mn, while €3mn was pledged as collateral with Komercijalna Banka. It was built in 2016.

The property will be confiscated once the first-instance ruling becomes effective following the appeal procedure, Sloboden Pecat reported on June 9.

VMRO-DPMNE reacted in a statement, saying that the court verdict was “dictated by SDSM”, North Macedonia's current ruling party, and accused the prosecutors and the court of being an "extended arm" of the ruling Social Democrats.

In addition, former PM and leader of VMRO-DPMNE Nikola Gruevski, who fled the country in 2018 to avoid his first prison sentence, has been sentenced to another six years in prison for abusing his position to build the party’s headquarters and those of its other branches illegally, contrary to the law on financing the political parties.

This is the fifth prison sentence for Gruevski, who has now been sentenced to a total of 25 years in prison.

Gruevski served as prime minister from August 2006 until January 2016, leading the government of conservative VMRO-DPMNE.

Gruevski, who had been tried in absentia, fled to Budapest in 2018 to avoid serving a prison sentence of two years for the purchase of a luxury Mercedes using state funds. He was granted asylum in Hungary.

BREAKING: Putin signs off annexation of four Ukrainian regions
18 minutes ago
Kremlin preparing for a protracted conflict by putting Russian economy onto a war footing
4 hours ago
Hungary’s forint slides to new low after central bank ends tightening cycle
7 hours ago
Slovak ministers criticise Czech border controls
7 hours ago
Might Trussonomics be a branch of Erdoganomics?
12 hours ago