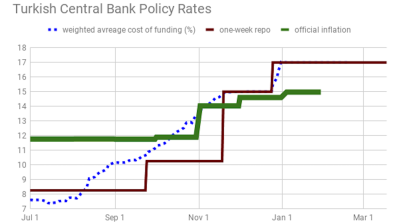 Turkey’s central bank on February 18 held its policy rate at 17.00% as predicted by almost all analysts. It was the second time in a row that the regulator left the monetary policy settings unchanged.

Jason Tuvey at Capital Economics said that “the hawkish tone in the statement [that accompanied the decision to hold the key rate], including a commitment to bring inflation back to the 5% target, supports our view that an easing cycle will arrive later and will be slower than most currently expect. This will help to underpin a further rally in the lira over the coming months”.

A cumulative 675bp of tightening has been brought in since Naci Agbal was appointed Central Bank of Republic of Turkey (CBRT) governor in early November, at which time President Recep Tayyip Erdogan also replaced his economy minister and said that his administration stood ready to swallow “bitter pills”—this was taken as a reference to the president, who is famously averse to interest rate hikes even in the face of high inflation (indeed, Erdogan claims high rates cause inflation), taking a step back from his so-called Erdoganomics to allow the central bank to switch to orthodox economic policy, using rate hikes to combat inflation. Erdogan’s change of course came with the economy seemingly poised to plunge into its second full-blown balance of payments crisis in two years.

Annual inflation in Turkey now officially stands at around 15%, though some academics have challenged the methodology used by the state’s statisticians to reach that figure, claiming that Turkish inflation in reality is far higher.

Tuvey added: “Policymakers will have also taken heart from the continued rally in the lira over the past month as investors have become confident that the shift to orthodoxy will stick. The currency is now up by around 20% against the dollar from its low point in November and is, by some margin, the best performing EM currency since the start of this year. The lira’s appreciation has been supported by a reduction in the risk premium that investors demand to hold Turkish assets, typified by a sharp narrowing of dollar bond spreads.

“At the same time, there are mounting signs that Turkey’s economic recovery has faltered in recent months. The latest activity data show that, while industry held up well in December, retail sales slumped amid the country’s second wave of COVID-19. And the tightening of monetary conditions over the second half of last year has caused credit growth to slow sharply.”

Tuvey also noted that “Erdogan has not given up on his unorthodox views on monetary policy and he could still do an about-turn and try to force the CBRT to shift tack and cut rates. For now, though, we are confident that orthodox monetary policy will stay in place for the foreseeable future and that the central bank will keep interest rates high in order to bring down inflation”.

Capital forecast that the benchmark one-week repo rate will be left at 17.00% throughout 2021. “In contrast, the consensus is for 375bp of rate cuts by year-end. If we’re right and geopolitical tensions continue to thaw, the lira’s rally probably has further to run. We expect it to end this year at 6.25/$,” Tuvey said.

The CBRT monetary policy committee said after its rate-setting meeting: “The tight monetary policy stance will be maintained decisively... for an extended period until strong indicators point to a permanent fall in inflation and price stability. Additional monetary tightening will be delivered if needed.”

Russian President Vladimir Putin's popularity ticked up 1pp from 64% in January to 65% in February according to the latest poll from independent pollster the Levada Center, regaining the levels prior to Navalny's demonstrations.

There was a remarkable upswing in business confidence in January, according to Rosstat’s monthly survey. The confidence level rose to -1, its highest level since May 2019, marking a return to pre-coronacrisis levels.

Russian President Vladimir Putin’s trust rating improved by 3 percentage points to 32%, while that of jailed anti-corruption activist and opposition politician Alexei Navalny fell by one point to 4% in between December 2020 and February 2021.

Poland’s GDP contraction adjusted upwards to -2.7% y/y in Q4
16 hours ago
Russian President Vladimir Putin's popularity ticked up 1pp in February to 65%
21 hours ago
Russian business confidence bounces back strongly in January
22 hours ago
Putin’s trust rating improves 3pp to 32%, Navalny falls 1pp to 4% despite protests
3 days ago
Romania’s public debt-to-GDP ratio up 12.4pp y/y to 47.7% at end-2020
4 days ago