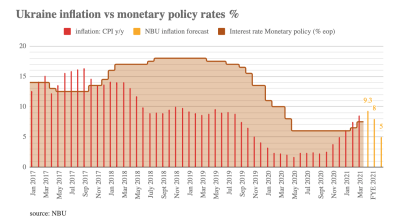 A surge in inflation in March led the National Bank of Ukraine to hike rates by a full percentage point to 7.5%
By bne IntelliNews April 16, 2021

The National Bank of Ukraine (NBU) raised Ukraine’s prime rate by a full percentage point, to 7.5% on April 16, more than analysts had anticipated, after inflationary pressures surged in March.

Inflation pressures have grown across the whole region. The NBU was the first of the central banks in Eastern Europe to hike rates last month and was followed by the Central Bank of Russia (CBR), which surprised markets with a 25bp hike in March.

The NBU's decision is the second month of hikes and highlights that the two years of easing monetary policy have been reversed as the regulator attempts to keep inflation in check.

“The Board of the National Bank of Ukraine has decided to raise the key policy rate by 1 pp, to 7.5% per annum. This step is aimed at gradually slowing down inflation in H2 2021 and returning it to the 5% target already in H1 2022,” the NBU said in a statement.

Analysts were prepared for a rate hike, but the 100bp was bigger than anticipated.

“As expected, inflation deviated from the 5% ± 1 pp target range in Q1 2021, but the deviation was greater than forecasted, mainly due to temporary factors,” the NBU explained. “In March, consumer inflation accelerated to 8.5% year on year, while core inflation reached 5.9%. Inflation exceeded the NBU forecast published in the January 2021 Inflation Report.”

The NBU said that on the one hand, the steep rise in inflation was largely driven by temporary factors, such as growing global prices for food and energy. A revival in the global economy and the effects of smaller harvests continued to push up prices. A low comparison base also played an important role.

It added that on the other hand, underlying inflationary pressures increased due to sustained growth in consumer demand, which was, among other things, fuelled by higher wages. Retail turnovers consistently exceeded pre-crisis levels, being 5.6% y/y larger in February. Inflation expectations remain high on the back of the rapid growth in the prices of goods consumed every day.

Ukraine's annual inflation will reach a 1.5-year high of 8% in March 2021, exceeding the Central Bank's forecast of 7.6%, said a monthly Reuters poll of Ukrainian analysts.

The Central Bank revised its 2020 inflation forecast to 8%, from 7%. After inflation hit 8.5% y/y last month, the NBU now predicts that it will peak at 9.6% in the third quarter. It will then recede steadily, hitting 5% for 2021, the bank has predicted.

“Inflation will peak in Q3 2021. However, it will reverse gradually as new harvest supplies come to the market, the effect of a low comparison base wanes for some products, and the NBU raises its key policy rate. Inflation will start to decelerate in autumn, return to its target range in H1 2022, and subsequently remain there,” the NBU said.

Romania’s average net wages posted an impressive 11.9% annual advance to RON3,561 in April - but the outstanding performance is largely due to low base effects.