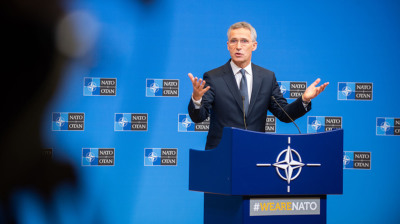 Bosnia consists of two entities; alongside Republika Srpska with its dominant Serbian population, there is the larger Bosnian Federation, whose population consists mainly of ethnic Bosniaks and Croats. Membership of Nato is one more of the major disputes between the two entities. While the Federation wants to join Nato as well as the EU, the leader of Republika Srpska’s largest party, Milorad Dodik, who is currently a member of the state-level presidency, openly opposes Nato membership and claims close ties with Russia and Serbia instead.

“We will discuss taking the next steps in developing Nato’s relationship with Bosnia and Herzegovina. And I expect ministers to endorse Nato’s readiness to accept Bosnia’s first Annual National Programme. This is an important tool which can help the country implement political, economic and defence reforms. It is now up to Bosnia & Herzegovina to decide to take up this offer,” Stoltenberg said.

If Bosnia decides to take the opportunity and submit the first annual programme, this will activate the MAP, in which the country has theoretically participated since 2010. However, due to political disagreements, the MAP has not been activated so far.

Bosnia joined the Partnership for Peace, the first step towards Nato membership, in 2006, and signed an agreement on security cooperation in March 2007.

Although Bosnia is far from being ready to become a Nato member, Stoltenberg’s statement was interpreted as a sign that Bosnia is finally getting closer to membership in the alliance.

Klix.ba quoted Bosnia’s Deputy Defence Minister Sead Jusic as saying that this is a big step for the country and is a recognition of its efforts to get closer to the alliance.

However, Dodik’s party was far from positive. Radovan Viskovic, who has been nominated to become Republika Srpska’s next prime minister, said that his party will go forward with a referendum on Nato membership. Dodik said in 2017 that his party will call the referendum and also adopted a resolution proclaiming its military neutrality.

Dodik is a close ally to Russia and Serbia and has many times said that his entity will coordinate its future status with Serbia, which is officially militarily neutral with the highest level of cooperation with Nato and its members, but also with Russia and non-Nato countries.

Russian activity in the Balkans has been growing rapidly since Montenegro became Nato’s newest member, and Moscow loudly opposes further Euro-Atlantic integration of the Balkans, even though it claims that it has nothing against European integration as long as it does not jeopardise its own interests.

Stoltenberg also said that once Macedonia implements the name deal agreed with Greece, the country will become Nato’s next member.

“We have seen Skopje’s progress towards becoming Nato’s 30th member. It is now for the authorities in Skopje to implement the name agreement. When that is complete, we will be able to sign the accession protocol,” Stoltenberg said.

Macedonia’s parliament gave the green light to opening the process of constitutional changes related to the name deal with Greece on October 19 with the support of eight opposition MPs who were later expelled from the opposition VMRO-DPMNE party.

On December 2, Macedonia’s parliament adopted two constitutional amendments out of four related to the name deal with Greece. MPs went on to adopt the remaining two amendments in principle on December 3.