National Bank of Ukraine raises discount rates to a whopping 25% 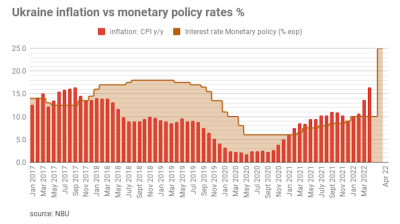 The National Bank of Ukraine has raised the discount rate by a massive 15%, from 10% to 25%, Epravda reported on June 2.

"After considering several scenarios, the National Bank decided to raise the discount rate by 15 percentage points to 25%," said NBU Chairman Kyrylo Shevchenko in a briefing. 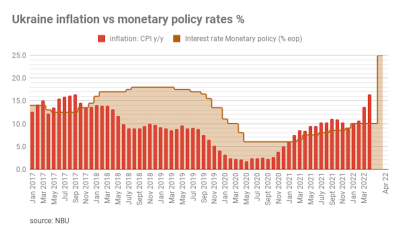 The NBU expects that raising the discount rate to 25% will be sufficient to ease the pressure on the foreign exchange market and stabilise inflation expectations, which in the long run will create the preconditions for the transition to a cycle of lowering the discount rate.

According to the NBU, a slight increase in the key rate would not have a significant impact on the financial and economic system due to the limited effectiveness of the monetary transmission mechanism during the war.

In addition, the regulator has expanded the corridor of interest rates on monetary transactions with banks to create additional space for the revival of the interbank market. From June 3, the rate for refinancing loans will be equal to the discount rate plus 2%, and for certificates of deposit, the discount rate minus 2%.

Shortly after the full-scale invasion, the NBU announced that it had suspended making any rate decisions until the “economic situation normalises”. Therefore, the discount rate remained unchanged at 10%.

"Due to the forced introduction of administrative restrictions, market monetary instruments, in particular the discount rate, do not play a significant role in the functioning of the monetary and foreign exchange markets," the central bank explained on March 3.