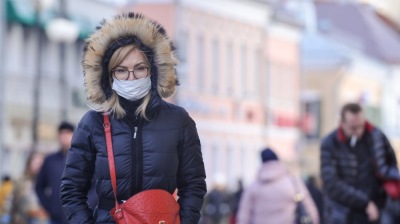 The new daily infection coronavirus infection rate surged to over 13,500 at the weekend, its highest level since January, causing the Moscow mayor to put the capital back on lockdown / wiki
By bne IntelliNews June 13, 2021

Infection rates are rising despite the widespread availability of the Sputnik V vaccine, which is considered to be one of the safest and most effective in the world.

Given the spike in infection rates Sobyanin ordered a curfew for bars and restaurants of 11pm, closed playgrounds and parks and ordered stricter compliance with mask and glove rules.

He has also imposed a week of paid non-work starting on June 12 to try to reverse the climb of the infection rates.

The extra days off “will only allow us to cope with the rise in infections if every one of us will exercise maximum caution. And, of course, we need to vaccinate more actively to protect our loved ones and ourselves,” Sobyanin said as cited by RT, adding that all vaccination centres will remain operational in the city.

The government has been trying to encourage the population to get the shot, but without much luck. One region in Siberia toyed with the idea of mandatory vaccinations for public sector workers, but quickly reversed an order following the public outcry. The Kremlin remains very sensitive to the public mood, with important Duma elections due in September.

Sobyanin also ordered companies to send 30% of their staff to work from home, including all those older than 65 and anyone suffering from a chronic disease.

Throughout the next week, restaurants, bars and nightclubs will be barred from accepting guests between 11pm and 6am, with only takeaway and food deliveries to be allowed during those hours, according to the mayor’s order.

Even more worrying, the head of one of Moscow’s largest COVID hospitals, Denis Protsenko, reported they were seeing a new strain of the virus that was resistant to treatments that had previously been effective.

“There is a feeling that the virus is changing,” Protsenko, the head of Moscow’s Kommunarka Hospital, told Russian radio station Ekho Moskvy. “The proven methods of treatment for hyperinflammation or, as we call it, cytokine storms, are often failing.”

“This makes us think that the virus has also changed and has mutated in this year and a half,” he said, before encouraging people to get vaccinated against the disease.

The situation is some of the regions is also getting rapidly worse. Social media showed footage of ambulances queuing up outside hospitals in St Petersburg as the rush of emergency cases began to overwhelm the emergency room staff.

Russia has confirmed 5,193,964 cases of coronavirus (COVID-19) and 126,073 deaths, according to the national coronavirus information centre. Russia’s total excess fatality count since the start of the coronavirus pandemic is around 475,000.