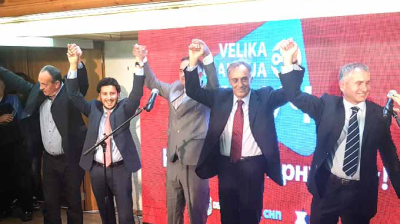 Several Montenegrin opposition parties have agreed to join forces after the October 16 general election and form a government without the ruling Democratic Party of Socialists (DPS) led by Prime Minister Milo Djukanovic.

If they succeed, this would be the first time in Montenegro’s short history of independence when the DPS will not head the government.

On October 10, the Demokratska Crna Gora (Democratic Montenegro) party decided to join an agreement signed earlier this month by the Democratic Front and the newly-formed Kljuc (Key) coalition to form a government together after the election, excluding DPS, Portalanalitika.me reported.

According to the latest available poll conducted by CEDEM, the opposition parties are set to receive at least 42% of the votes in the coming elections, while DPS would get support from around 43% of the voters.

This means that the future government will depend on the decision of the Social Democratic Party (SDP) – the DPS’ former long-term ally that withdrew its support from Djukanovic’s government in January and ended its union with the ruling party. Ethnic Albanian, Bosniak and Croat parties  might help either side.

The Kjuc coalition was formed in September and includes the Socialist People's Party (SNP), Demos - a party newly established by the former leader of the Democratic Front Miodrag Lekic and Reform Action (URA).

DF is anti-Nato, and part of a pro-Russian coalition of parties that was created before the previous general election in 2012 with the main goal of overthrowing the DPS.

The European Bank for Reconstruction and Development (EBRD) said it intends to lend a total of €25mn to Montenegro to buy passenger trains and railway maintenance equipment. Of the total ... more