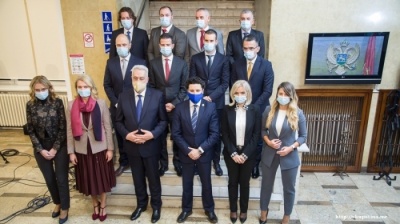 The members of Montenegro’s new ruling coalition have agreed to share out the top jobs in the state administration and major state-controlled companies after months of tense talks.

The new ruling coalition comprises around 20 small parties that were formerly in opposition, and agreed to work together despite their political differences to oust President Milo Djukanovic’s Democratic Party of Socialists (DPS).

Although all parties in the coalition — led by three smaller coalitions, For the Future of Montenegro, Peace is Our Nation and Black in White — backed the government of Prime Minister Zdravko Krivokapic, some of them were not happy with his decision not to make political appointments in the cabinet but to appoint a government of experts.

Krivokapic’s government has pledged to fight corruption and reform public administration among its top goals.

However, the arrival of a fragmented coalition of small parties to take over governing Montenegro from the DPS, which was deeply entrenched in the state administration after three decades in power, inevitably eased questions as to how effective the new government could be. It was expected to struggle to make headway working with a civil service long controlled by the DPS.

For the Future of Montenegro will have a two-thirds quota in the state administration and the reminder will be equally distributed between the two other coalitions, reported public broadcaster RTCG.

For the Future of Montenegro’s leading member the Democratic Front will appoint the heads of several big companies, which are majority owned by the state. This distribution should satisfy the Democratic Front, which was keen to get ministerial seats and announced that it would back Krivokapic’s government only in order to oust the DPS from power.

His party will also decide who will head the investment agency, the directorate for protection of classified information and the agency for electronic communications.

Albania and North Macedonia remain stuck in EU accession process
COMMENT: Towards sustainable, safe and smart roads in the Western Balkans
Prime minsters of Albania and Montenegro visit Kyiv in show of support