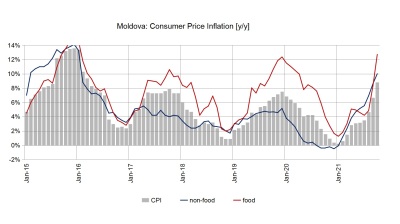 Moldova’s headline inflation increased to 8.8% y/y in October, driven by fuel and food prices, after consumer prices increased by 2.2% over the latest month alone.

It is expected to further rise by at least 0.9pp, and possibly in double-digits, in November, when the regulated natural gas price is revised upwards as an effect of a much higher import price.

Unlike other countries in the region where inflation was mainly driven by higher energy prices, electricity and natural gas prices in Moldova had actually decreased over the past year.

The average price of fuel increased significantly, by 29% y/y and contributed 1.7pp to the overall consumer price inflation. But this accounted for only one fifth of the overall 8.8% y/y inflation.

In the meantime, the price of natural gas (for residential users) dropped by 12% y/y and that of electricity by 7.9% y/y. They made a combined negative contribution of 0.5pp to the overall inflation, against the regional trend.

In November, however, the natural gas price will increase significantly. The government promised to offset two-thirds of the rise in the end-user price (138%). This means that the end-user gas price would still increase by 46% - with an impact of 0.9pp on the overall inflation.

Mocked as the ‘Nebati Comet’, Turkey’s finance minister is accused of baffling the markets
Romania’s consumer prices resume growth in December
Slovak inflation up to 5.8% in December