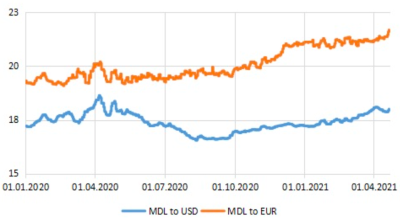 Moldova's leu fell against the euro and the US dollar recently.
By bne IntelliNews April 21, 2021

The exchange rate of the Moldovan leu (MDL) has been steadily falling against both the euro and the US dollar since last autumn, reaching the weakest level against the euro in five years on April 21.

The exchange rate of the Moldovan leu to the euro, set by the National Bank of Moldova (BNM) for April 21, amounted to MDL21.6 to the euro. On April 21.7, the leu was 11% weaker versus the euro as compared to the beginning of November. The depreciation of the leu against the US dollar amounted to almost 8.5%.

The weakening of the Moldovan currency is driven by several factors including the drop in exports. In January-February, exports fell by 8% compared to the same period in 2020.

The second factor is the seasonal decline in remittances to the country from migrants. Usually the volume of transfers falls in January-April, then grows by summer and reaches a peak in August, expert Roman Chirca told Newsmaker.md .

“The third factor is the absence of large grants or loans from foreign partners. They are practically at zero level,” the expert noted.

In his opinion, the currency will keep falling if exports continue to decline this spring until June or until the crop is harvested, when the exports will resume.

“The National Bank takes a passive position, allowing the exchange rate to be formed due to supply and demand. The regulator now allows the currency to fall smoothly. But I think that it will intervene and take some measures if the euro reaches RON 22,” Chirca said.

IDIS Viitorul think-tank expert Veaceslav Ionita told Newsmaker.md he expects the currency to stop weakening by the Orthodox Easter holiday on May 2.

He stressed that last year the Moldovan currency was stronger than regional peers (Ukraine, Russia, Belarus and Turkey). But at the same time, in 2020, inflation was the lowest in the entire history of Moldova at less than 0.4%. In a situation where the inflation corridor set by the National Bank is 5% +/- 1.5pp, but there is no inflation, the BNM can afford to allow the leu not to strengthen, Ionita concluded, adding that last year there was a surplus of currency in Moldova, and this year, on the contrary, a small deficit.

Ukraine's retail sector turnover up 22.7% in May y/y
14 hours ago
Russian industrial production for May up 11.8% y/y
20 hours ago
Growth of Romania's stock of loans reaches double digits at end-May
1 day ago
Russian banks extend bull run by posting $3bn in profits for May
1 day ago
Ukraine’s revises down its GDP growth estimate in 1Q21 to -2.2% contraction
1 day ago