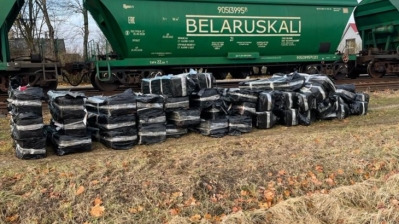 On Monday, the EU warned Belarus of more sanctions if it chooses to send Belarusian troops into Ukraine. As the sanctions pressure mounts, more private and state actors are looking for loopholes to circumvent them.

On September 15, Vladimir Orlovsky, Chairman of Belarus’ State Customs Committee, remarked that the most important thing today is “to look for unconventional approaches, because it will be impossible to keep working using old tricks. This is why we are going to find new ways.” The quote was made in reference to Belarus’ struggle to establish new supply chains after Western sanctions and the Ukraine war have halted many of its previous trade routes.

Just two days prior to Orlovsky’s statement, Latvia’s Citadele bank noted that companies are trying to avoid sanctions by importing or exporting sanctioned goods to or from Russia and Belarus via third countries such as Kazakhstan, Serbia or even Bulgaria.

As bne IntelliNews reported previously, this can be tied to Belarus’ search for new trade routes in which it often praises trade, logistics or transportation cooperation with countries such as China, Mongolia or various post-Soviet states. These countries don’t make up a significant enough market for Belarus to help its deficit in its traditional exports, but they can function as middlemen in importing or exporting sanctioned goods.

For Russian consumers, Belarus has also become a sort of “third country” this year as trips to Belarus have become a way for Russians to avoid some of the negative effects of Western sanctions. Russian tour operators have noted a sharp increase in booked trips to Belarus from Russia this year. There, Russians can engage in “sanctions-free” shopping, buying Western brands such as Zara, Massimo Dutti, Calvin Klein or Levis. Another popular activity is to open a bank account with a Belarusian bank that still issues Visa or Mastercard bank cards.

Minsk has for some time been using various tricks in its trade with EU countries, such as the Belarusian company Interservis’ trade scheme of avoiding Belarus’ and Russia’s joint Customs Union duties for exporting Russian petroleum products to the EU by re-classifying them as “solvents” or “thinners”. A similar scheme was discovered by investigative journalists in February this year who found out that Belarus had been exporting sanctioned oil products to Estonia under a new customs code.

In July, Ukrainian intelligence services reported that Belarus’ State Border Committee had been given special orders from the very top of the regime not to interfere with smuggling activities along Belarus’ borders with Ukraine, Poland and Lithuania. Ukrainian intelligence tied this decision directly to a wish from Minsk to increase government revenues due to the sharp decrease in exports caused by Western sanctions.

The Minsk regime has for a long time been forcing its EU neighbours (especially Lithuania) into a game of hide and seek with smuggled cigarettes. This intensified in 2021, likely due to the fear of further sanctions halting conventional exports like they have done this year. During the first three quarters of 2021 alone, Lithuanian customs seized 328mn smuggled cigarettes coming from Belarus, compared with 297mn in 2020. Smuggled cigarettes are hidden in freight wagons or trucks transporting everything from fertilisers and water filter materials to limestone and claydite.

While the scale of the smuggling is believed to have decreased after Lithuania banned the transit of Belarusian fertilisers on February 1, the Lithuanian authorities are not taking any chances. On October 4, Lithuania installed a new X-ray system on one of its border checkpoints with Belarus. The system can scan trains that travel at up to 60 km/h and was supplied by the Polish subsidiary of Chinese Nuctech.

Lithuania stepped up its customs controls already in August due to increased attempts at circumventing Western sanctions. Between March and August, Lithuanian customs stopped over 3,000 import, export and transit shipments and refused entry to more than 1,200 vehicles registered in Belarus and Russia into the EU for suspected attempts of breaching sanctions.

Latvia tightened its rules for importing fuel and cigarettes from Belarus this summer in order to discourage Latvian citizens from going to Belarus. This year, Belarus has been proud of itself for allowing a visa-free regime over the land border for citizens of Lithuania, Latvia and Poland. However, Latvian authorities are not only fearing that this could be a way of increasing sales of cigarettes and fuels, but also fear that their citizens are being targeted by the Belarusian security services.

The continued use of migrants

Besides using third countries for trading with sanctioned goods and smuggled cigarettes, Minsk is still heavily engaged in the migration scheme which it started last year, where thousands of migrants coming mainly from the Middle East were tricked into believing they could cross into the EU from Belarus legally without any issues. Instead, they were met by Polish, Lithuanian and Latvia border guards and even soldiers, who pushed them back across the border. After having been stuck at the Belarus-EU border with little food or shelter, some migrants wished to return home, but were then met by Belarusian border guards forcing them to try to cross the border again.

While this isn’t a circumvention of a sanction per se, it’s likely one of the many “tricks” which Orlovsky and other Belarusian officials feel are needed under today’s sanctions regime.

Besides giving Lukashenko (and probably Putin too) a chance to test the EU:s decisiveness, unity and resolve last year, this scheme is likely providing the regime and co-operating smugglers with an extra income. Migrants paid thousands of dollars for plane tickets, visas and short-term housing in Belarus before finding themselves duped and stuck at the Belarus-EU border.

This migrant scheme prompted Poland, Lithuania and Latvia to build strong border walls on their border to Belarus. This year both Lithuania and Poland have finished their border walls; however, the barbed wire and fence does not faze the Belarusian border guards, who have been caught cutting open the fence and barbed wire on the Belarus-Lithuanian border several times in order to continue to smuggle over migrants. Earlier this year, 11 people were arrested in Germany, Poland and the UK for operating an organised crime network that smuggled migrants from Belarus into the EU.