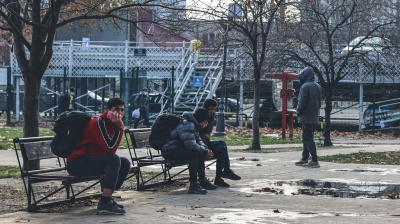 Migrants waiting for their smuggler in the Afghan park.
By Katarzyna Rybarczyk in Belgrade January 12, 2022

During the 2015 European migrant crisis, hundreds of thousands of migrants arrived in the European Union through the Balkan route, which became one of the major migratory paths mainly for refugees fleeing conflicts in Syria, Iraq, and Afghanistan.

More than half a decade later, the route might officially be closed, but the migrant movement never ceased.

According to Frontex, the European Border and Coast Guard Agency, in the first seven months of 2021 more than 22,500 migrants tried to cross into Europe via the Balkans.

When the Balkan corridor was open, refugees had the certainty of finding protection after reaching one of the EU member states. Now, they do not know whether they will be let in and, on the way, they are entirely at the mercy of smugglers who frequently become their abusers.

Refugees going along the Balkan route typically pass through Albania or North Macedonia heading for Serbia, which is their main exit point. From there they hope to first get to Hungary, thus entering the EU, and later go to richer countries such as Germany or France.

For migrants trying to get to the EU, Serbia represents a crucial step in their journey. Although not in the EU itself, the country is located on the organisation’s edge so migrants who make it there are almost at the finish line. 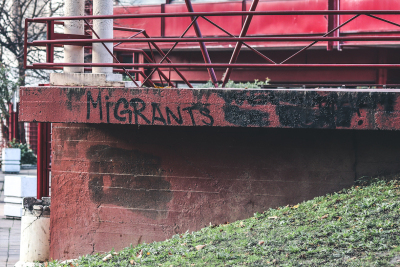 Once they make their way from the Middle East or Central Asia to the Balkans, they need to reconnect with smugglers. In Serbia, the smuggling network is so large and effective that even if they cannot reach the person who helped them initially, they can easily find someone else.

Between February 2017 and March 2021, 210 individuals from 24 organised groups were arrested in Serbia for their involvement in people smuggling. As for the number of migrants trying to pass through Serbia and enter the EU, in 2020 alone, more than 8,500 people were intercepted while attempting to cross the Serbian border.

"It is assessed that at any moment, there are at least 500-600 people in transit in Belgrade," Afghanistan Analysts reported.

The migrant smuggling network in Serbia flourishes primarily because of widespread corruption, cases of which are rarely investigated.

In June 2020, BIRN, the Balkan Investigative Reporting Network, published a report revealing that certain smugglers had connections and collaborated with Serbian police and security forces. With migrant smugglers making so much profit, some succeed in bribing police officers so that they not only turn a blind eye to their activities but also offer them protection.

Consequently, there have been cases where people involved in the smuggling chain were arrested but never prosecuted afterwards.

The main hub of migrant activity in Serbia is the Afghan park in Belgrade. Located not too far from the city centre, right next to the central bus station, the park bears the promise of a better life. There, almost daily, one can see migrants with their belongings packed in a few bags, waiting for minibuses that will drive them across the borders. 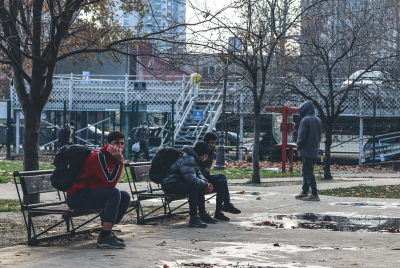 Migrants waiting for their smuggler in the Afghan park. Photo: Katarzyna Rybarczyk.

Upon entering the park I noticed a group of men in their mid-twenties sitting on benches with backpacks and looking around as if they were waiting for someone. I approached them and found out that they were from Syria.

"Where are you going?" I asked them.

"To Europe," they replied, meaning clearly not the continent but the European Union.

They explained that they were going there to find work and were hoping to bring their families there once they earn enough money to pay for their trip. Throughout our conversation one of them was trying to reach their smuggler who was supposed to pick them up shortly and drive them to the border with Hungary.

In Serbia everyone knows what is going on in the Afghan park but it seems like the Serbian authorities do not react because the country’s reception facilities are already overcrowded and admitting more migrants would be challenging.

Before I went to Serbia to investigate whether the Balkan corridor is still active, I was reporting from Iraqi Kurdistan. There I met several people thinking of embarking on a journey through this route. They told me that it costs around €5,000 for the first leg of the trip, to the Balkans, and then an additional €3,000 or €4,000 to continue the journey to the EU.

For most migrants, paying for the trip means spending a few years worth of savings. Each truck can fit at least ten people but travelling is usually done in groups of twenty or more. The profit smugglers make from each journey is therefore huge.

It is estimated that the Balkan migrant-smuggling business is worth more than €50mn a year.

Sometimes one smuggler can only take migrants across a few borders, not all the way to the EU so they have to look for new ones on the way. That puts them at risk of being taken advantage of. People who organise these journeys know those who are the most desperate will pay any price not to have to go back to their conflict-ridden home countries.

Smugglers lure migrants in with promises of employment in Europe and claim that they can take them there directly. In most cases, however, the journey is not so smooth.

On the way there are parts of the route that migrants have to cross on foot, often in darkness, over difficult terrain, and in temperatures falling below freezing. Furthermore, it is not uncommon for smugglers to abandon the refugees and run away with their money.

From the Balkans, even though so close to migrants’ final destination, the journey proves to be especially difficult with increased police presence, barbed-wire fences and smugglers who cannot always be trusted. And then, even making it to the EU does not mean that they reach safety. On the contrary, violent pushbacks and abuse at the hands of security forces are common.

Or, even in a scenario where they are allowed in, many find themselves stuck in detention centres and refugee camps, alienated from the rest of society and living a life that does resemble what they thought was awaiting them in Europe.

Katarzyna Rybarczyk is a political correspondent for Immigration Advice Service, an immigration law firm operating globally and providing legal aid to forcibly displaced persons. Through her articles, she aims to raise awareness about security threats worldwide and the challenges facing communities living in low and middle-income countries.

Who needs a war?
23 hours ago
Outbreak of calm grips Ukraine
1 day ago
Primark to launch in Romania as it pursues CEE expansion
1 day ago
All eyes fall on Nazarbayev clan’s extraordinary wealth as Kazakhstan’s Tokayev asserts authority by targeting super rich
2 days ago
UniCredit's hopes of acquiring Russia's Otkritie Bank marred by geopolitical tensions
4 days ago